Spear manufacture and use is not confined to human beings. It is also practiced by the western chimpanzee. Chimpanzees near Kédougou, Senegal have been observed to create spears by breaking straight limbs off trees, stripping them of their bark and side branches, and sharpening one end with their teeth. They then used the weapons to hunt galagos sleeping in hollows. Orangutans also have used spears to fish, presumably after observing humans fishing in a similar manner.

Archaeological evidence found in Germany documents that wooden spears have been used for hunting since at least 400,000 years ago, and a 2012 study suggests that Homo heidelbergensis may have developed the technology about 500,000 years ago. Wood does not preserve well, however, and Craig Stanford, a primatologist and professor of anthropology at the University of Southern California, has suggested that the discovery of spear use by chimpanzees probably means that early humans used wooden spears as well, perhaps, five million years ago.

Neanderthals were constructing stone spear heads from as early as 300,000 BP and by 250,000 years ago, wooden spears were made with fire-hardened points.

From 200,000 BP onwards, Middle Paleolithic humans began to make complex stone blades with flaked edges which were used as spear heads. These stone heads could be fixed to the spear shaft by gum or resin or by bindings made of animal sinew, leather strips or vegetable matter. During this period, a clear difference remained between spears designed to be thrown and those designed to be used in hand-to-hand combat. By the Magdalenian period (c. 15000-9500 BC), spear-throwers similar to the later atlatl were in use.

One of the earliest forms of killing prey for humans, hunting game with a spear and spear fishing continues to this day as both a means of catching food and as a cultural activity. Some of the most common prey for early humans were mega fauna such as mammoths which were hunted with various kinds of spear. One theory for the Quaternary extinction event was that most of these animals were hunted to extinction by humans with spears. Even after the invention of other hunting weapons such as the bow the spear continued to be used, either as a projectile weapon or used in the hand as was common in boar hunting.

Barred spears: A barred spear has a crossbar beneath the blade, to prevent too deep a penetration of the spear into an animal. The bar may be forged as part of the spearhead or may be more loosely tied by means of loops below the blade. Barred spears are known from the Bronze Age, but the first historical record of their use in Europe is found in the writings of Xenophon in the 5th century BC.[39] Examples also are shown in Roman art. In the Middle Ages, a winged or lugged war-spear was developed (see above), but the later Middle Ages saw the development of specialised types, such as the boar-spear and the bear-spear.[40] The boar-spear could be used both on foot or horseback. 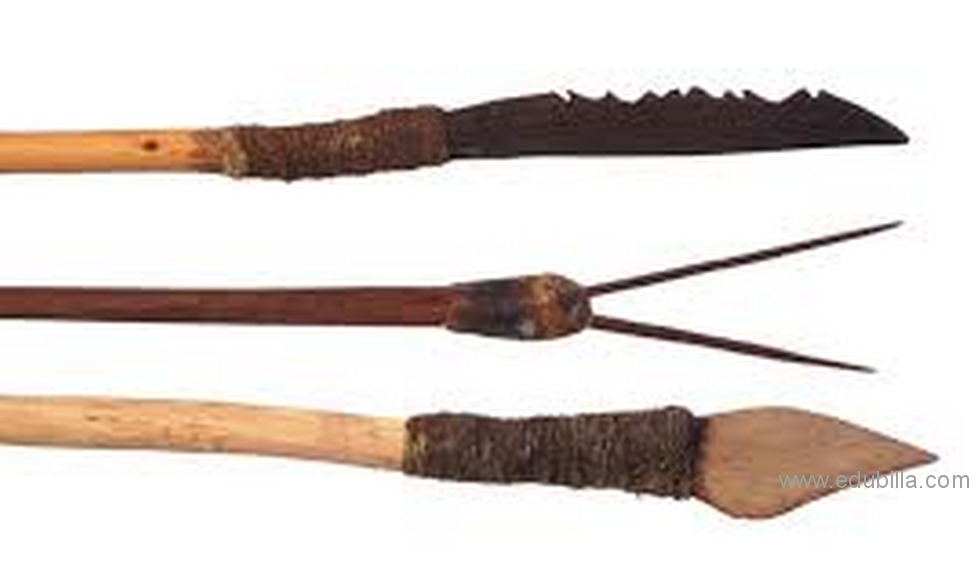