The earliest and simplest aqueducts were constructed of lengths of inverted clay tiles and sometimes pipes which channelled water over a short distance and followed the contours of the land. The earliest examples of these date from the Minoan civilization on Crete in the early 2nd millennium BCE and from contemporary Mesopotamia. Aqueducts were also an important feature of Mycenaean settlements in the 14th century BCE, ensuring autonomy against siege for the acropolis of Mycenae and the fortifications at Tiryns. The first sophisticated long-distance canal systems were constructed in the Assyrian empire in the 9th century BCE and incorporated tunnels several kilometres in length. These engineering feats permitted the aqueducts to be constructed in a more direct line between source and outlet. The Babylonians in the 8th century BCE also built extensive and sophisticated canal systems. In the 7th century BCE a wide canal crossed a 280m long bridge to bring water to Nineveh and water was brought through a 537m tunnel to supply Jerusalem.

The first Greek large-scale water management projects occurred in the 7th century BC and were usually to supply communal drinking fountains. Both Samos and Athens were supplied by long-distance aqueducts from the 6th century BCE; the former was 2.5km long and included the famous 1km tunnel designed by Eupalinus of Megara. Pisistratus constructed an aqueduct of 15 to 25cm wide ceramic pipes in the Ilissus valley, 8km long. In the 4th century BCE Priene in Asia Minor had a similar pipeline which followed an artificial ditch covered in stone slabs. Third century BCE Syracuse benefitted from no fewer than three aqueducts and Hellenistic Pergamon, ca 200 BCE, had some of the most sophisticated water management structures known at that time.

It is, however, the Romans who have rightly gained celebrity as the aqueduct builders par excellence. Hugely ambitious engineering projects successfully mastered all kinds of difficult and dangerous terrain and made their magnificent arched aqueducts a common sight throughout their empire, supplying towns with water to meet not only basic needs but also those of large public baths, decorative fountains (nymphaea) and private villas. Whilst most aqueducts continued to run along the surface and follow land contours wherever possible, the invention of the arch allowed for the construction of large-span structures employing new materials such as concrete and water-proof cement which could ignore unfavourable land features and draw the water along the straightest possible route along a regular gradient. Similarly, an increase in engineering expertise allowed for large-scale and deep tunnelling projects.

The first aqueducts to serve Rome were the 16km long Aqua Appia (312 BCE), the Anio Vetus (272-269 BCE) and the 91km long Aqua Marcia (144-140 BCE).  Steadily, the network increased and even created connections between aqueducts: the Aqua Tepula (126-125 BCE), Julia (33 BCE), Virgo (22-19 BCE), Alsietina (2 BCE), Aqua Claudia and Anio Novus (completed in 52 CE), Aqua Traiana (109 CE) and the Aqua Alexandrina (226 CE). Gradually, other aqueducts were built across Italy, for example, in Alatri (130-120 BCE) and Pompeii (ca 80 BCE). Julius Caesar built an aqueduct at Antioch, the first outside Italy. Augustus oversaw the construction of aqueducts at Carthage, Ephesus, and the 96km aqueduct which served Naples. Indeed, the first century CE saw an explosion of aqueduct construction, perhaps connected to the spread of Roman culture and their love of bathing and fountains but also to meet the water needs of ever larger population concentrations.

From the first to the second centuries CE, the very limits of architectural feasibility were stretched and some of the largest Roman aqueducts were constructed. These had two or three arcades of arches and reached prodigious heights. The aqueduct of Segovia was 28m high and the Pont du Gard in southern France was 49m in height, both of which still survive today as spectacular monuments to the skill and audacity of Roman engineers. 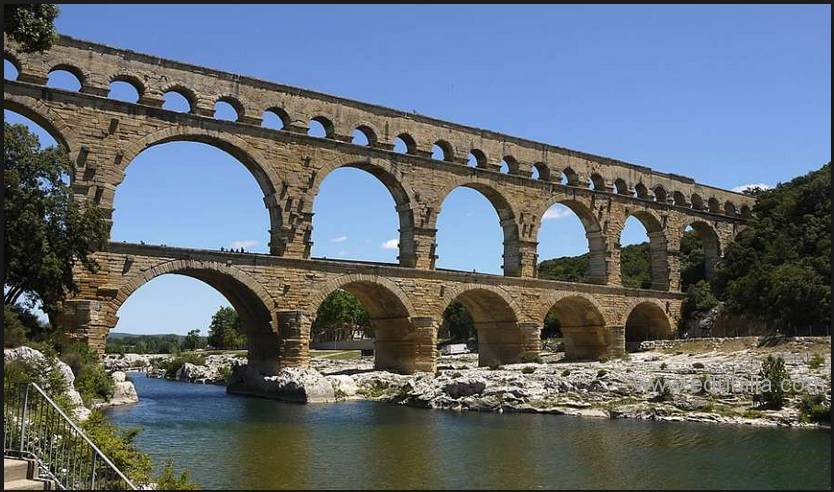 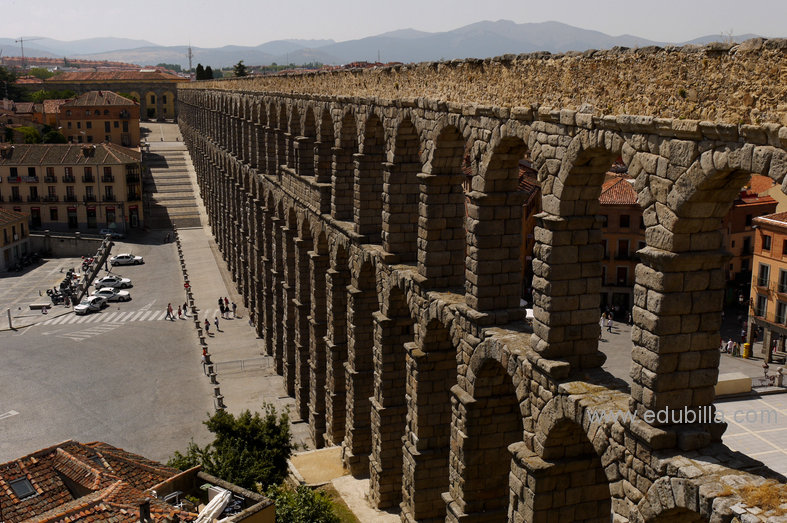