A catapult is a ballistic device used to launch a projectile a great distance without the aid of explosive devices—particularly various types of ancient and medieval siege engines. Although the catapult has been used since ancient times, it has proven to be one of the most effective mechanisms during warfare.  Catapults were invented by the ancient Greeks.

Castles and fortified walled cities were common during this period – and catapults were used as a key siege weapon against them. As well as attempting to breach the walls, incendiary missiles could be thrown inside—or early biological warfare attempted with diseased carcasses or putrid garbage catapulted over the walls.

Defensive techniques in the Middle Ages progressed to a point that rendered catapults ineffective for the most part. The Viking siege of Paris (885–6 A.D.) “saw the employment by both sides of virtually every instrument of siege craft known to the classical world, including a variety of catapults,” to little effect, resulting in failure.

The most widely used catapults throughout the Middle Ages were as follows:

Ballistas were similar to giant crossbows and were designed to work through torsion. The ammunition used were basically giant arrows or darts made from wood with an iron tip. These arrows were then shot “along a flat trajectory” at a target. Ballistas are notable for their high degree of accuracy, but also their lack of firepower compared to that of a Mangonel or Trebuchet. Because of their immobility, most Ballistas were constructed on site following a siege assessment by the commanding military officer.

The springald's design is similar to that of the ballista's, in that it was effectively a crossbow propelled by tension. The Springald's frame was more compact, allowing for use inside tighter confines, such as the inside of a castle or tower. This compromised the force though, making it an anti-personnel weapon at best.

These machines were designed to throw heavy projectiles from a “bowl-shaped bucket at the end of its arm”. Mangonels were mostly used for “firing various missiles at fortresses, castles, and cities,” with a range of up to 1300 feet. These missiles included anything from stones to excrement to rotting carcasses. Mangonels were relatively simple to construct, and eventually wheels were added to increase mobility.

Mangonels are also sometimes referred to as Onagers. Onager catapults initially launched projectiles from a sling, which was later changed to a “bowl-shaped bucket”. The word 'Onager' is derived from the Greek word 'onagros' for wild ass, referring to the “kicking motion and force”that were recreated in the Mangonel's design. In terms of historical records, there's not much to go on. The most detailed account of Mangonel use is from “Eric Marsden's translation of a text written by Ammianus Marcellius in the 4th Century AD” describing its construction and combat usage.

Trebuchets were probably the most powerful catapult employed in the Middle Ages. The most commonly used ammunition were stones, but “darts and sharp wooden poles” could be substituted if necessary. The most effective kind of ammunition though involved fire, such as “firebrands, and deadly Greek Fire”. Trebuchets came in two different designs: Traction, which were powered by people, or Counterpoise, where the people were replaced with “a weight on the short end”.The most famous historical account of trebuchet use dates back to the siege of Stirling Castle in 1304, when the army of Edward I constructed a giant trebuchet known as Warwolf, which then proceeded to “level a section of [castle] wall, successfully concluding the siege.”

A simplified trebuchet, where the trebuchet's single counterweight is split, swinging on either side of a central support post. 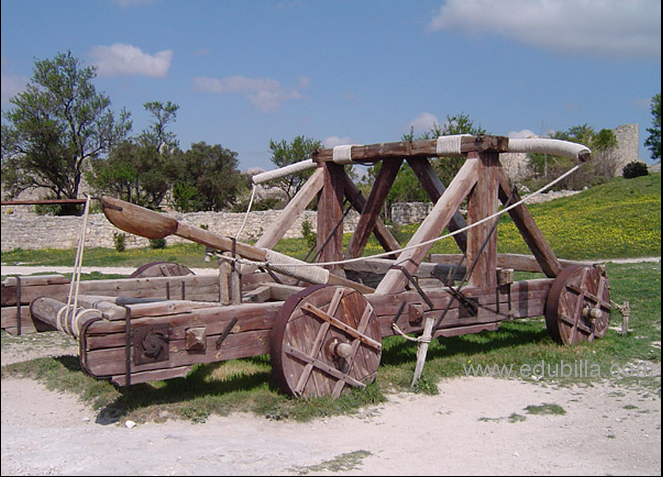 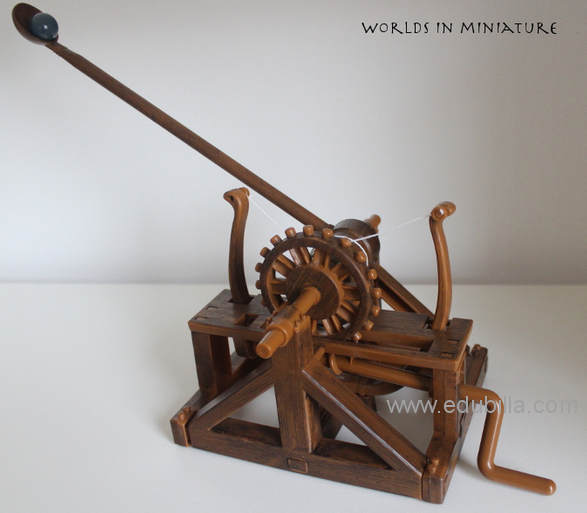