The first evidence of distillation comes from Greek alchemists working in Alexandria in the 1st century AD.Distilled water has been known since at least c. 200, when Alexander of Aphrodisias described the process.Distillation in China could have begun during the Eastern Han Dynasty (1st–2nd centuries), but archaeological evidence indicates that actual distillation of beverages began in the Jin and Southern Song dynasties.A still was found in an archaeological site in Qinglong, Hebei province dating to the 12th century. Distilled beverages were more common during the Yuan dynasty.Arabs learned the process from the Alexandrians and used it extensively in their chemical experiments.

Clear evidence of the distillation of alcohol comes from the School of Salerno in the 12th century.Fractional distillation was developed by Tadeo Alderotti in the 13th century.

In 1500, German alchemist Hieronymus Braunschweig published Liber de arte destillandi (The Book of the Art of Distillation) the first book solely dedicated to the subject of distillation, followed in 1512 by a much expanded version. In 1651, John French published The Art of Distillation the first major English compendium of practice, though it has been claimed that much of it derives from Braunschweig's work. This includes diagrams with people in them showing the industrial rather than bench scale of the operation.

As alchemy evolved into the science of chemistry, vessels called retorts became used for distillations. Both alembics and retorts are forms of glassware with long necks pointing to the side at a downward angle which acted as air-cooled condensers to condense the distillate and let it drip downward for collection. Later, copper alembics were invented. Riveted joints were often kept tight by using various mixtures, for instance a dough made of rye flour.These alembics often featured a cooling system around the beak, using cold water for instance, which made the condensation of alcohol more efficient. These were called pot stills. Today, the retorts and pot stills have been largely supplanted by more efficient distillation methods in most industrial processes. However, the pot still is still widely used for the elaboration of some fine alcohols such as cognac, Scotch whisky, tequila and some vodkas. Pot stills made of various materials (wood, clay, stainless steel) are also used by bootleggers in various countries. Small pot stills are also sold for the domestic production of flower water or essential oils.

Early forms of distillation were batch processes using one vaporization and one condensation. Purity was improved by further distillation of the condensate. Greater volumes were processed by simply repeating the distillation. Chemists were reported to carry out as many as 500 to 600 distillations in order to obtain a pure compound.

In the early 19th century the basics of modern techniques including pre-heating and reflux were developed, particularly by the French,then in 1830 a British Patent was issued to Aeneas Coffey for a whiskey distillation column, which worked continuously and may be regarded as the archetype of modern petrochemical units. In 1877, Ernest Solvay was granted a U.S. Patent for a tray column for ammonia distillation and the same and subsequent years saw developments of this theme for oil and spirits.

With the emergence of chemical engineering as a discipline at the end of the 19th century, scientific rather than empirical methods could be applied. The developing petroleum industry in the early 20th century provided the impetus for the development of accurate design methods such as the McCabe–Thiele method and the Fenske equation. The availability of powerful computers has also allowed direct computer simulation of distillation columns. 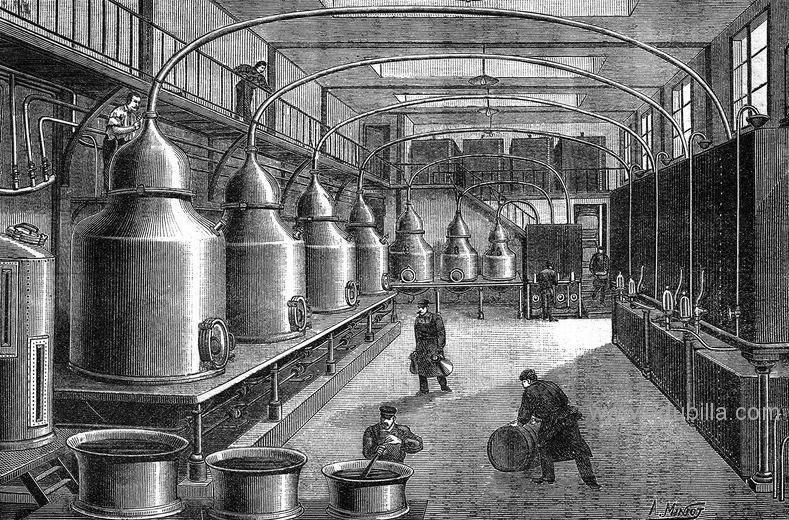