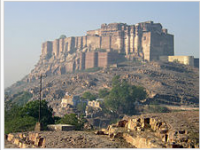 Defenses have been constructed for thousands of years.Bronze and Iron age hillforts took advantage of natural hills for defense purposes ,and the romans built the Saxon Shore along the southeast bcoast of Britain to deter invasion.

The word fort is derived from the latin fortis meaning ""strong"" and many millitary installations are known as forts.

Three major methods were used for the construction of ancient Indian forts. The first consisted of earthen ramparts. Often they were constructed of the sand which was dug out of the ditch surrounding the fort. The second of rubble with earth on the outside which was more sturdy. The third type of construction was with stone and masonry work. The last was the strongest. Often materials from demolished forts were reused in the building of new forts.

By 4 BCE, fortified cities were common in India. The largest ones were between the city of Mathura (on the Yamuna river) and Magadha (on the Ganges). Another series of forts in the south, was on the Ujjain(on the Narmada) leading into the Deccan. These are inferred by the remains of fort walls and bastions seen on excavation at Rajagriha and at several sites in the Gangetic plain notably Kaushambi. At the latter site huge walls of burnt brick, which look like they have been battered. There does not seem to be any formal planning of these forts.

There are few descriptions of these ancient structures. The most noted is the one by Megasthenes, an ambassador of Seleucus I Nicator to the court of Chandragupta Maurya. He describes Pataliputra as being guarded by a ditch with wooden walls. The fort had 570 towers and 54 gates with colonnaded halls decorated with gold and silver. One such hall has been excavated and is one of the oldest stone structures in India.

With the advent of the Muslims, closely followed by the introduction of artillery in the 16th century there were several changes to the construction and design of forts. These changes were similar to the changes that took place in Western forts with the advent of gunpowder, i.e. the lowering of walls, thickening of walls, further pushing out of bastions etc.The construction of a citadel in the centre and putting in more area between the citadel and the walls was characteristic of Muslim forts (influenced in turn by the Norman motte and bailey). Classic examples of such structures are the Golkonda and the Berar fort.

Although no Indian forts were destroyed by sudden disasters, there are several which were abandoned due to the ambitions of their rulers and have consequently deteriorated over time. Very few castles have survived unchanged since the early Middle Ages or even since the 14th-15th centuries, most of those built in the 10th-15th centuries were later rebuilt and altered. Castles were still used as living quarters until the 19th-20th centuries, and so were continually modified. Even now, some of them are private property. 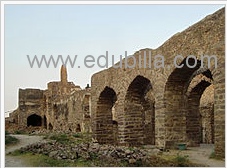