An arch bridge is a bridge with abutments at each end shaped as a curved arch. Arch bridges work by transferring the weight of the bridge and its loads partially into a horizontal thrust restrained by the abutments at either side. A viaduct (a long bridge) may be made from a series of arches, although other more economical structures are typically used today.

Possibly the oldest existing arch bridge is the Mycenaean Arkadiko bridge in Greece from about 1300 BC. The stone corbel arch bridge is still used by the local populace.The well-preserved Hellenistic Eleutherna Bridge has a triangular corbel arch.The 4th century BC Rhodes Footbridge rests on an early voussoir arch.

Although true arches were already known by the Etruscans and ancient Greeks, the Romans were - as with the vault and the dome - the first to fully realize the potential of arches for bridge construction.A list of Roman bridges compiled by the engineer Colin O'Connor features 330 Roman stone bridges for traffic, 34 Roman timber bridges and 54 Roman aqueduct bridges, a substantial part still standing and even used to carry vehicles.A more complete survey by the Italian scholar Vittorio Galliazzo found 931 Roman bridges, mostly of stone, in as many as 26 different countries (including former Yugoslavia).

Roman arch bridges were usually semicircular, although a number were segmental arch bridges (such as Alconétar Bridge), a bridge which has a curved arch that is less than a semicircle.[7] The advantages of the segmental arch bridge were that it allowed great amounts of flood water to pass under it, which would prevent the bridge from being swept away during floods and the bridge itself could be more lightweight. Generally, Roman bridges featured wedge-shaped primary arch stones (voussoirs) of the same in size and shape. The Romans built both single spans and lengthy multiple arch aqueducts, such as the Pont du Gard and Segovia Aqueduct. Their bridges featured from an early time onwards flood openings in the piers, e.g. in the Pons Fabricius in Rome (62 BC), one of the world's oldest major bridges still standing.

In China, the oldest existing arch bridge is the Zhaozhou Bridge of 605 AD, which combined a very low span-to-rise ratio of 5.2:1, with the use of spandrel arches (buttressed with iron brackets). The Zhaozhou Bridge, with a length of 167 feet (51 m) and span of 123 feet (37 m), is the world's first wholly stone open-spandrel segmental arch bridge, allowing a greater passage for flood waters.

In more modern times, stone and brick arches continued to be built by many civil engineers, including Thomas Telford, Isambard Kingdom Brunel and John Rennie. A key pioneer was Jean-Rodolphe Perronet, who used much narrower piers, revised calculation methods and exceptionally low span-to-rise ratios. Different materials, such as cast iron, steel and concrete have been increasingly used in the construction of arch bridges. 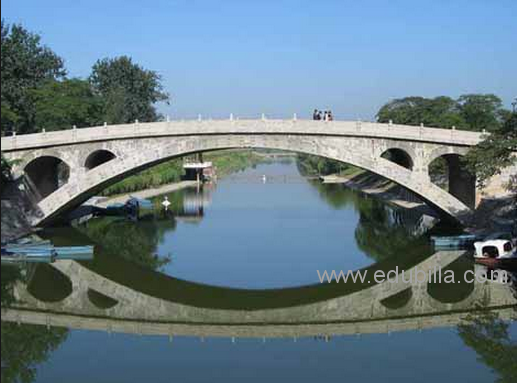