It is very difficult to say when and where the first oil lamp was used. This is partly because it is difficult to draw a line detailing when the primitive forms of creating a continuous source of light from fire can be termed a lamp. The first lamps were made of naturally occurring objects, coconuts, sea shells, egg shells and hollow stones. Some believe that the first proper lamps were carved from stones. Curved stone lamps were found in places dated to the 10th millennium BC. (Mesolithic, Middle Stone Age Period, circa 10,300 - 8000 BC) The oldest stone-oil lamp was found in Lascaux in 1940 in a cave that was inhabited 10,000 to 15,000 years ago.

Some archaeologists claim that the first shell-lamps were in existence more than 6,000 years ago. (Neolithic, Later Stone Age, c. 8500 - 4500 BC). They believe that the alabaster shell-shaped lamps dug up in Sumerian sites dating 2,600 BC were imitations of real shell-lamps that were used for a long time. (Early Bronze, Canaanite / Bronze I-IV, c. 3300 - 2000 BC)

It is generally agreed that the evolution of handmade lamps moved from bowl-shaped to saucer-shaped, then from saucer with a nozzle, to a closed bowl with a spout.

Middle Bronze Age lamps (MB),The four-wick oil lamps persist into this period, most of the lamps now have one wick. Early in this period the pinch is shallow, while later on it becomes more prominent and the mouth protrudes from the lamp's body. The bases are simple and flat. The crude potter’s wheel is introduced, transforming the handmade bowls to a more uniform container. The saucer style evolves into a single spout shape.

Late Bronze Age lamps (LB),A more pronounced, deeper single spout is developed, and it is almost closed on the sides. The shape is evolving to be more triangular, deeper and larger. All lamps are now wheel-made. The base is simple, usually flat. 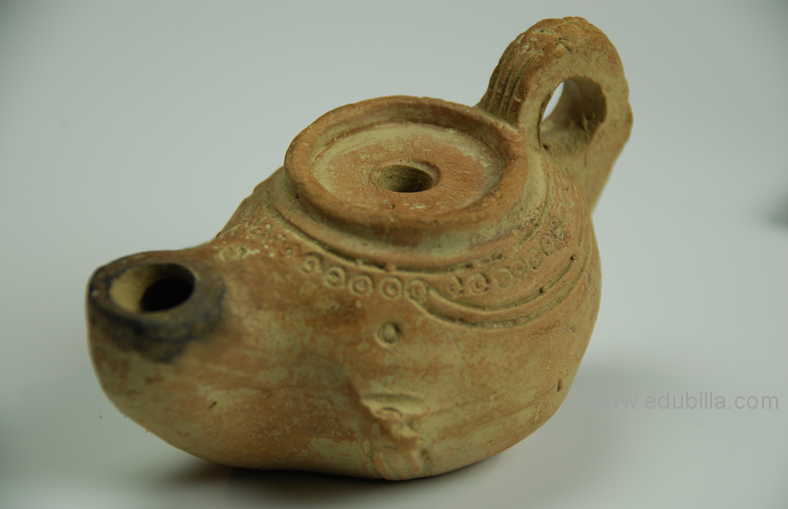 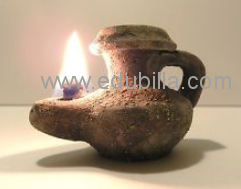