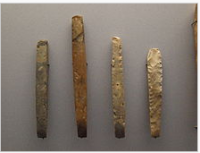 A chisel is a tool with a characteristically shaped cutting edge (such that wood chisels have lent part of their name to a particular grind) of blade on its end, for carving or cutting a hard material such as wood, stone, or metal by hand, struck with a mallet, or mechanical power, The handle and blade of some types of chisel are made of metal or wood with a sharp edge in it.

Chisel-like tools have been dated to the paleolithic era ,which stretches across a vast expanse vof evolutionary time ,from before the first Homo sapiens to roughly 10,000 B.C.E.During this time humans were making and refining stone tools ,which became gradually more specialized over time.Other materials were also used,and bone chisels from around 30,000 B.C.E have been uncovered in southern France ,near the village of Aurignac.Although very difficult to date exactly,it is thought that by about 7500 B.C.E,what we would recognise today as a chisel was in fairly common use.

By the time of the Bronze age ,chisels had become quite varied and included gouges-chisels with curved blades-and tanged chisels ,where the blade is connected to the handle by a collar.The greek architect Manolis Korres believes the chisels used by the ancient Greeks needed specialized tools to craft their iconic temple in acropolis.

During the medival period ,carpenters employed tools known as ""Former"" chisels .these had a broad,flared blade,which was used to carve rough wood,there were also other chisels for detailed and speciality work. 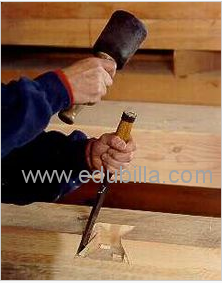 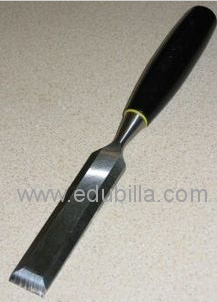