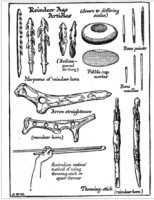 Wooden darts were known at least since the Middle Paleolithic (Schöningen, Torralba, Clacton-on-Sea and Kalambo Falls). While the spearthrower is capable of casting a dart well over 100 meters, it is most accurately used at distances of 20 meters or less. Seven spears were found in the Schöningen 13 II-4 layer, dating from about 400,000 years ago and thought to represent activities of Homo heidelbergensis. The spearthrower is believed to have been in use by Homo sapiens since the Upper Paleolithic (around 30,000 years ago).Most stratified European finds come from the Magdalenian (late upper Palaeolithic). In this period, elaborate pieces, often in the form of animals, are common. The earliest secure data concerning atlatls has come from several caves in France dating to the Upper Paleolithic, about 21,000 to 17,000 years ago. The earliest known example is a 17,500 year-old Solutrean atlatl made of reindeer antler and found at Combe Saunière (Dordogne), France.

In Europe, the spearthrower was supplemented by the bow and arrow, in the Epi-Paleolithic. Along with improved ease-of-use, the bow offered the advantage that the bulk of elastic energy is stored in the throwing device, rather than the projectile,arrow shafts can therefore be much smaller, and have looser tolerances for spring constant and weight distribution than atlatl darts. This allowed for more forgiving flint knapping: dart heads designed for a particular spear thrower tend to differ in mass by only a few percent. By the Iron Age, the amentum, a strap attached to the shaft, was the standard European mechanism for throwing lighter javelins. The amentum gives not only range, but also spin to the projectile.

Atlatl are sometimes used in modern times for hunting. There are meetings and events where people can throw darts.A few examples of the locations of such competitions are in Oregon,Rhode Island[citation needed] and in Lexington, Kentucky held yearly. In the U.S., the Pennsylvania Game Commission has given preliminary approval for the legalization of the atlatl for hunting certain animals. The animals that would be allowed to atlatl hunters have yet to be determined, but attention is focused on deer. Currently, Alabama allows the atlatl for deer hunting, while a handful of other states list the device as legal for rough fish (those not sought for sport or food), some game birds and non-game mammals.Starting in 2007, Missouri allowed use of the atlatl for hunting wildlife (excluding deer and turkey), and starting in 2010, also allowed deer hunting during the firearms portion of the deer season (except the muzzleloader portion).Starting in 2012, Missouri allowed the use of atlatls during the Fall archery deer and turkey hunting seasons and starting in 2014 allowed the use of atlatl during the Spring turkey hunting season as well. Missouri also allows the use of the atlatl for fishing, with some restrictions (similar to the restrictions for spearfishing and bowfishing). The Nebraska Game and Parks Commission will allow the use of atlatls for the taking of deer in 2013. 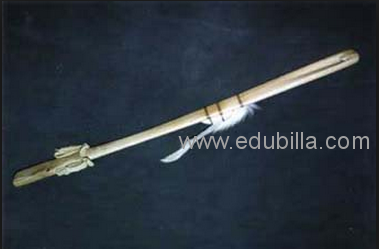