A sword is a blade weapon used primarily for cutting or thrusting. The precise definition of the term varies with the historical epoch or the geographical region under consideration. A sword in the most narrow sense consists of a straight blade with two edges and a hilt. However, in nearly every case, the term may also be used to refer to weapons with a single edge (backsword).

The word sword comes from the Old English sweord, cognate to swert, Old Norse sverð, from a Proto-Indo-European root swer- ""to wound, to cut"". Non-European weapons called ""sword"" include single-edged weapons such as the Middle Eastern saif, the Chinese dao and the related Japanese katana. The Chinese jian is an example of a non-European double-edged sword, like the European models derived from the double-edged Iron Age sword.

Historically, the sword developed in the Bronze Age, evolving from the dagger; the earliest specimens date to ca. 1600 BC. The Iron Age sword remained fairly short and without a crossguard. The spatha as it developed in the Late Roman army became the predecessor of the European sword of the Middle Ages, at first adopted as the Migration period sword, and only in the High Middle Ages developed into the classical arming sword with crossguard.

The use of a sword is known as swordsmanship or (in an early modern or modern context) as fencing. In the Early Modern period, the sword developed into the rapier and eventually the smallsword, surviving into the 18th century only in the role of duelling weapon. By the 19th century, swords were reduced to the status of either ceremonial weapon or sport equipment in modern fencing.

The sword is said to be the emblem of military honour and should incite the bearer to a just and generous pursuit of honour and virtue. It is symbolic of liberty and strength. In the Middle Ages, the sword was often used as a symbol of the word of God. The names given to many swords in mythology, literature, and history reflect the high prestige of the weapon and the wealth of the owner. 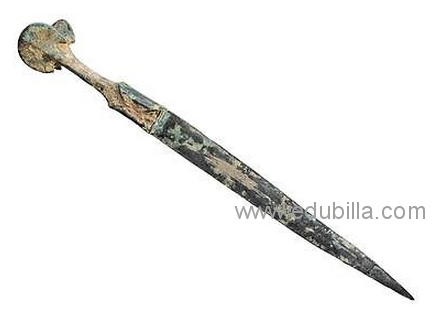