The oldest Australian Aboriginal boomerangs are ten thousand years old, but older hunting sticks have been discovered in Europe, where they seem to have formed part of the stone age arsenal of weapons.One boomerang that was discovered in Jaskinia Ob?azowa in the Carpathian Mountains in Poland was made of mammoth's tusk and is believed, based on AMS dating of objects found with it, to be about 30,000 years old.King Tutankhamen, the famous Pharaoh of ancient Egypt, who died over 3,300 years ago, owned a collection of boomerangs of both the straight flying (hunting) and returning variety.

No one knows for sure how the returning boomerang was first invented, but some modern boomerang makers speculate that it developed from the flattened throwing stick, still used by the Australian Aborigines and some other tribal people around the world, including the Navajo Indians in America. A hunting boomerang is delicately balanced and much harder to make than a returning one. Probably, the curving flight characteristic of returning boomerangs was first noticed by stone age hunters trying to ""tune"" their throwing sticks to fly straight.

Today, boomerangs are mostly used as sporting items. There are different types of throwing contests: accuracy of return, Aussie round,trick catch, maximum time aloft, fast catch, and endurance. The modern sport boomerang (often referred to as a 'boom' or 'rang'), is made of Finnish birch plywood, hardwood, plastic or composite materials and comes in many different shapes and colours. Most sport boomerangs typically weigh less than 100 grams (3.5 oz), with MTA boomerangs (boomerangs used for the maximum time aloft event) often under 25 grams (0.9 oz).

Traditionally, most boomerangs used by aboriginal groups in Australia were 'non-returning'. These weapons, sometimes called ""throwsticks"" or ""kylies"", were used for hunting a variety of prey, from kangaroos to parrots; at a range of about one hundred meters, a 2-kg non-returning boomerang could inflict mortal injury to a large animal. A throwstick thrown nearly horizontally may fly in a nearly straight path and could fell a kangaroo on impact to the legs or knees, while the long-necked emu could be killed by a blow to the neck.[citation needed] Hooked non-returning boomerangs, known as ""beaked kylies"", used in northern Central Australia, have been claimed to kill multiple birds when thrown into a dense flock. It should be noted that throwsticks are used as multi-purpose tools by today's aboriginal peoples, and besides throwing could be wielded as clubs, used for digging, used to start friction fires, and are sonorous when two are struck together. 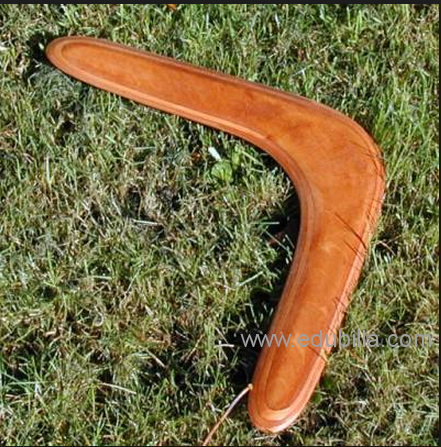 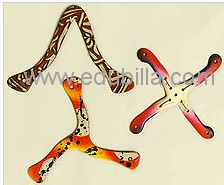