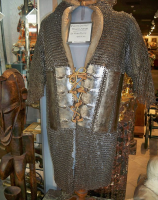 Chainmail was the earliest form of metal armour and was probably invented before the 5th century by the ancient Celts. The name mail comes from the French word ""maille"" which is derived from the Latin ""macula"" meaning ""mesh of a net"". The armour itself involved the linking of iron or steel rings, the ends of which were either pressed together, welded or riveted. Sometimes the rings were stamped out of a sheet of iron and these were then used in alternate rows with riveted links. The most common form of chainmail is the ""four-in-one"" pattern in which each link has four others linked through it. A few shirts have been found that appear to have been made of quilted fabric or leather to which were sewn rings and scales, and these shirts are not considered ""true"" mail.

Each piece of mail was fashioned specifically for whichever part of the body it was intended to protect. For the head there were the coif, aventail, mail fringe and a ""bishop's mantle""; for the torso, the shirt, hauberk, skirt and breeches; for the upper limbs, mail sleeves and mittens; for the lower limbs, chausses and sabatons.

Until the 14th century, mail was the primary armour for the average soldier. The main use of chainmail was to stop the wearer from being cut by the opponents blade. Mail did nothing to stop the damage from the force of the blow however, and was usually worn over a thick, padded undergarment. From the 1320's, shirts of mail, known as hauberks or byrnies, were often provided with flared sleeves covering to the middle of the forearms, and were long enough to reach past the wearer's knees. Some of the larger hauberks often had sleeves that were extended to form mittens for the hands. This was also the period when a shorter type of hauberk, the haubergeon, began to be used more regularly, its lower edge stopping to just above the knees. Some haubergeons had a flap-like extension at the center of the rear edge of the base which could be pulled up between the legs and laced in front to form a breke of mail to protect the genitals.

As there were developments in the armouring world, mail began to have a subordinate role in relation to plate armour, first being used as a linking elements for the various plates and then, in the 15th century, it was used to protect the more vulnerable parts of the body such as the elbow, neck, and knees joints. Mail shirts retained defensive importance during the 16th century with light horse and infantry armours, especially in conjunction with small pauldrons or spaulders and elbow length gauntlets which left part of the arms bare. In these cases, sleeves of mail were attached to the arming doublet worn under the armour. After this time, the use of mail slowly diminished as better plate armour was developed for the arms and legs, although it was still in use as late as the 17th century in Eastern Europe and the Middle East. The craft of making mail is quite separate and distinct from that of the process of manufacturing plate armour. Because so much mail was produced, we can assume the method of manufacture must have been fast, allowing for division of the labour within the workshop. The most skilled task, the final linking of the rings, would have been done by the master craftsman, who would have been kept supplied with rings and rivets. The early stages in the production of mail, (the simple, labour intensive tasks) were left to apprentices and assistants. 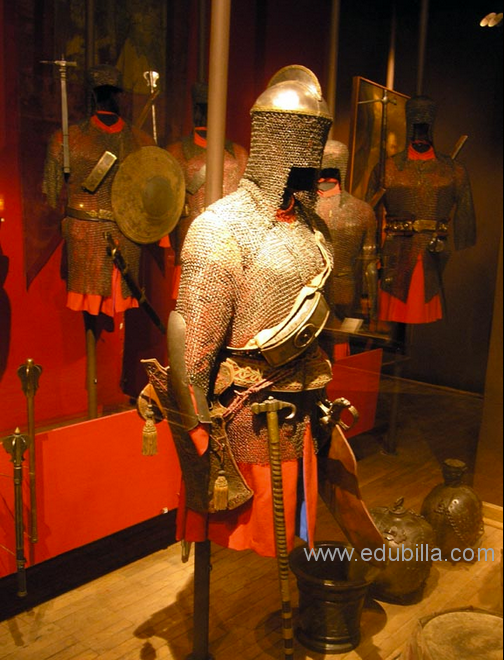 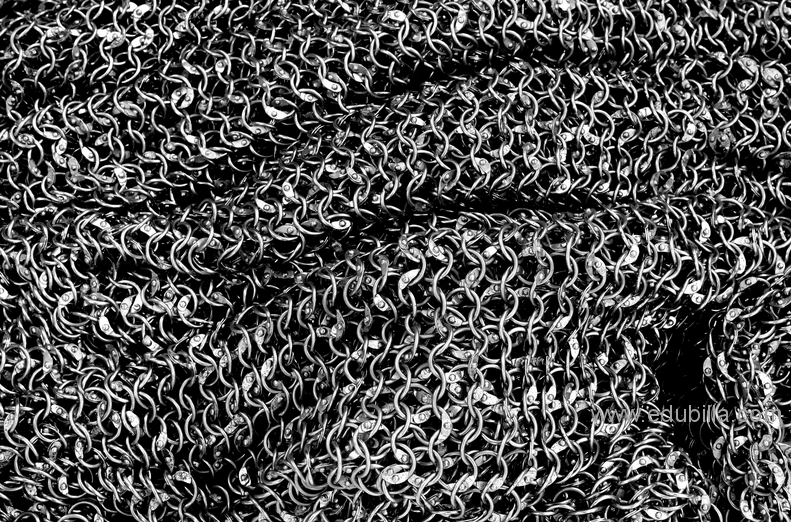