The Ancient Egyptians had knowledge of sail construction. This is governed by the science of aerodynamics. A primary feature of a properly designed sail is an amount of ""draft"", caused by curvature of the surface of the sail. Hannu was an ancient Egyptian explorer (around 2750 BC) and the first explorer of whom there is any knowledge. He made the first recorded exploring expedition and wrote his account of the exploration in stone. He traveled along the Red Sea to Punt and sailed to what is now part of eastern Ethiopia and Somalia. He returned to Egypt with great treasures, including precious myrrh, metal and wood. It must be said also about warships. Undoubtedly, warships of Ancient Egypt began in the early Middle Kingdom, and perhaps - at the end of the Old Kingdom, but the first mention and a detailed description of a large enough and heavily armed ship dates from XVI BC. ""And I ordered to build twelve warships with rams, dedicated to Amun or Sobek, or Maat and Sekhmet, whose image was crowned best bronze noses. Carport and equipped outside rook over the waters, for many paddlers, having covered rowers deck not only from the side, but and top. and they were on board eighteen oars in two rows on the top and sat on two rowers, and the lower - one, a hundred and eight rowers were. And twelve rowers aft worked on three steering oars. And blocked Our Majesty ship inside three partitions (bulkheads) so as not to drown it by ramming the wicked, and the sailors had time to repair the hole. And Our Majesty arranged four towers for archers - two behind, and two on the nose and one above the other small - on the mast with narrow loopholes. they are covered with bronze in the fifth finger (3.2mm), as well as a canopy roof and its rowers. and they have (carried) on the nose three assault heavy crossbow arrows so they lit resin or oil with a salt of Seth (probably nitrate) tore a special blend and punched lead ball with a lot of holes, and one of the same at the stern. and long ship seventy five cubits (41m), and the breadth sixteen, and in battle can go three-quarters of iteru per hour (about 6.5 knots)..."" The text of the tomb of Amenhotep I (KV39). When Thutmose III achieved warships displacement up to 360 tons and carried up to ten new heavy and light to seventeen catapults based bronze springs, called ""siege crossbow"" - more precisely, siege bows. Still appeared giant catamarans that are heavy warships and times of Ramesses III used even when the Ptolemaic dynasty.

The world according to Herodotus, 440 BC

The belief in Herodotus' account, handed down to him by oral tradition,is primarily because he stated with disbelief that the Phoenicians ""as they sailed on a westerly course round the southern end of Libya (Africa), they had the sun on their right - to northward of them"" . 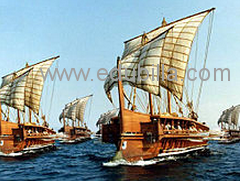