The use of stone instruments more than two million years ago heralded what we call the stone age and the very origins of humankind .while it is impossible to date when distinctly worked (rather than simply found)stone blades first appeared in the world,it seemms to have accured circa 30,000 B.C.E.

The technique that evolved to create sharp stones is now called lithic reduction.This involves the use of an implement(made of stone itself or of wood or bone) to strike a stone block in order to break off flakes.such flakes will be naturally sharp and can be turned in to a range of usefull tools and weapons such as scrapers ,scythes ,knives ,arrow heads,or spear points.Some early toolmakers may also have used what was left of the stone block to make axe heads.

Various kinds of stone were used to make blades ,although one of the most popular was flint_leading to the term ""flintknapper"" to describe anyone making stone blades by lithic reduction .As the techniques of flintknapping developed ,particularly the use of repetitive blows at particular angles,the craftsmen were able to gain much greater control over the size ,sharpness,and type of blade.

The period after the end of the last ice age ,10,000 years ago ,was characterized by increasingly sophisticated stone tools with multiple uses.other tools were produced using blades made by knapped flint or Obsidian,a type of naturally accuring glass .Small,sharp blades ,known as microliths ,became part of wooden cutting implements for use in farming,as well as barbs in arrow and spears,making them particularly effective as hunting weapons. 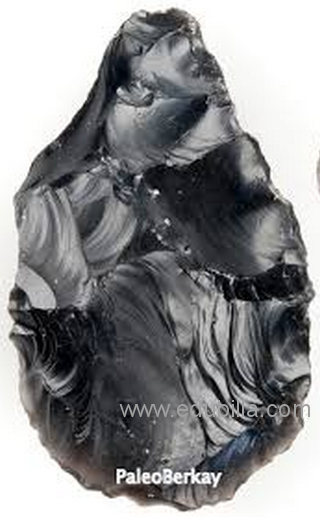