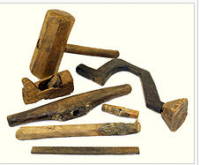 Around 35,000 BCE, Homo sapiens discovered the benefits of the application of rotary tools. This would have rudimentarily consisted of a pointed rock being spun between the hands to bore a hole through another material. This led to the hand drill, a smooth stick, that was sometimes attached to flint point, and was rubbed between the palms. This was used by many ancient civilizations around the world including the Mayans. The earliest perforated artifacts, such as bone, ivory, shells and antlers found, are from the Upper Paleolithic era.

Bow drill (strap-drills) are the first machine drills, as they convert a back-and forth motion to a rotary motion, and they can be traced back to around 10,000 years ago. It was discovered that tying a cord around a stick, and then attaching the ends of the string to the ends of a stick(a bow), allowed a user to drill quicker and more efficiently. Mainly used to create fire, bow-drills were also used in ancient woodwork, stonework and dentistry. Archeologist discovered a Neolithic grave yard in Mehrgrath, Pakistan dating from the time of the Harappans, around 7,500-9,000 years ago, containing 9 adult bodies with a total of 11 teeth that had been drilled.There are hieroglyphs depicting Egyptian carpenters and bead makers in a tomb at Thebes using bow-drills. The earliest evidence of these tools being used in Egypt dates back to around 2500 BCE.The usage of bow-drills was widely spread through Europe, Africa, Asia and North America, during ancient times and is still used today. Over the years many slight variations of bow and strap drills have developed for the various uses of either boring through materials or lighting fires.

The core drill was developed in ancient Egypt by 3000 BC. The pump drill was invented during Roman times, it consists of a vertical spindle aligned by a piece of horizontal wood and a flywheel to maintain accuracy and momentum.

The hollow-borer tip, first used around the 13th century, consisted of a stick with a tubular shaped piece of metal on the end, such as copper. This allowed a hole to be drilled while only actually grinding the outer section of it. This completely separates the inner stone or wood from the rest, allowing the drill to pulverize less material to create a similar sized hole.

While the pump-drill and the bow-drill were used in Western Civilization to bore smaller holes for a larger part of human history, the Auger was used to drill larger holes starting sometime between Roman and Medieval ages. The auger allowed for more torque for larger holes. It is uncertain when the Brace and Bit was invented however the earliest picture found so far dates from the 15th century.It is a type of hand crank drill that consists of two parts as seen in the picture. The brace, on the upper half, where the user holds and turns it and on the lower part is the bit. The bit is interchangeable as bits wear down. The auger uses a rotating helical screw similar to the Archimedean screw shaped bit that is common today. The gimlet is also worth mentioning as it is scaled down version of an auger.

In the East, churn drills were invented as early as 221 BC during the Chinese Qin Dynasty, capable of reaching a depth of 1500 m. Churn drills in ancient China were built of wood and labor-intensive, but were able to go through solid rock.The churn drill appears in Europe during the 12th century. In 1835 Isaac Singer is reported to have built a steam powered churn drill based off the method the Chinese used. Also worth briefly discussing are the early drill presses, they were machine tools that derived from bow-drills but were powered by windmills and water wheels. Drill presses consisted of the powered drills that could be raised or lowered into a material, allowing for less force by the user.

The next great advancement in drilling technology, the electric motor, led to the invention of the electric drill. It is credited to Arthur James Arnot and William Blanch Brain of Melbourne, Australia who patented the electric drill in 1889.In 1895, the first portable handheld drill was created by brothers, Wilhem & Carl Fein, from Stuttgart Germany. In 1917 the first trigger switch, pistol-grip portable drill was patented by Black & Decker.This was the start of the modern drill era. Over the last century the electric drill has been created to the variety of types, and multiple sizes for an assortment of specific uses.