The ard (or scratch plough) is a rudimentary plough that is light, without a mouldboard, symmetrical on either side of its line of draft, and fitted with a symmetrical share that traces a shallow furrow but does not invert the soil (as opposed to a turnplough).

Evidence of its use in prehistory is sometimes found at archaeological sites where the long, shallow scratches (ard marks) it makes can be seen cutting into the subsoil. The ard first appears in the mid-Neolithic and is closely related to the domestication of cattle. It probably spread with animal traction in general across the cereal-growing cultures of the Neolithic Old World. Its exact point of origin is unknown, but it spread quickly throughout West Asia, South Asia and Europe in the late Neolithic and early Chalcolithic.

Evidence appears in the Near East in the 6th millennium b.c. and iron versions ca.2300 b.c. - both in Assyria and Egypt (3rd dynasty). In Europe the earliest wooden ard remains date from ca.2300-2000 b.c. in Lavagone, Italy, but the earliest scratch marks date from 3500-3000. All of these were bow ards, also depicted in the rock drawings of Bohuslän, Sweden, and Fontanalba, France.

The first bow ards were likely adapted from hoes and like instruments and therefore suffered from poor balance due to their narrow bodies with only one point in the soil. This restricted their use to obstacle-free soils such as irrigated canals. The stress between body and pole was neutralized by adding a brace consisting of a fiber or leather strap between the low end of the pole and the body. The brace was later made out of wood and became important, not only on bow ards but also body ards. Today, a wooden brace between the draft-pole and upper stilt is a particular feature of body ards in Syria, central Iraq, Turkestan, and Kansu (China). The bow ard arrived in China as early as 3000 b.c. most likely arriving with wheat, barley, and hemp in the Lungshanoid period. Today, the bow ard is confined to minority tribes and mountainous regions, but in earlier times was widely disseminated until ousted by the turnplough.

The body ard made its way east as far as northwest China via Sinkiang Province, but then underwent radical changes. A long-pole body ard with a knee-like brace is still found in western Lanchow Province.

In some parts of Europe with moist soils, the body ard's path was cleared by a ristle, a coulter-like implement used to reach greater depth. In Spain and Portugal this remains a separate tool, but elsewhere it was the precursor to the coulter. 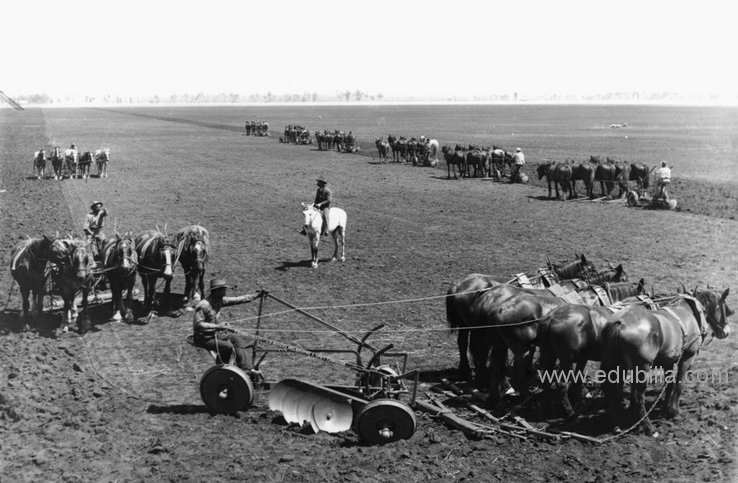