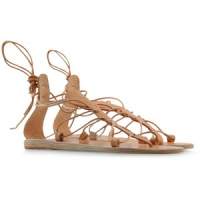 The earliest known shoes are sandals dating from approximately 7,000 or 8,000 BCE, found in the Fort Rock Cave in the US state of Oregon. in 1938. The world's oldest leather shoe, made from a single piece of cowhide laced with a leather cord along seams at the front and back, was found in the Areni-1 cave complex in Armenia in 2008 and is believed to date to 3,500 B.C.Otzi the Iceman's shoes, dating to 3,300 BC, featured brown bearskin bases, deerskin side panels, and a bark-string net, which pulled tight around the foot.The Jotunheimen shoe was discovered in August 2006. Archaeologists estimate that the leather shoe was made between 1800 and 1100 BCE,making it the oldest article of clothing discovered in Scandinavia.

A common casual shoe in the Pyrenees during the Middle Ages are espadrilles. These are sandals with braided jute soles and a fabric upper portion, and often includes fabric laces that tie around the ankle. The term is French and comes from the esparto grass. The shoes originate in the Catalonian region of Spain as early as the 13th century, and were commonly worn by peasants in the farming communities in the area.

Dutch pattens, ca. 1465. Excavated from the archeological site of Walraversijde, near Ostend, Belgium

Many medieval shoes were made using the turnshoe method of construction, in which the upper was turned flesh side out, and was lasted onto the sole and joined to the edge by a seam. The shoe was then turned inside-out so that the grain was outside. Some shoes were developed with toggled flaps or drawstrings to tighten the leather around the foot for a better fit. Surviving medieval turnshoes often fit the foot closely, with the right and left shoe being mirror images.The turnshoe method was replaced by the welted method around 1500.

By the 15th Century, pattens became popular by both men and women in Europe. These are commonly seen as the predecessor of the modern high-heeled shoe,while the poor and lower classes in Europe, as well as slaves in the New World, were barefoot.In the 15th century, the Crakow was fashionable in Europe. This style of shoe is named because it is thought to have originated in Krakow, the capitol of Poland. The style is characterized by the point of the shoe, known as the ""polaine"", which often was supported by a whalebone tied to the knee to prevent the point getting in the way while walking.Also during the 15th century, chopines were created in Turkey, and were usually 7-8 inches (17.7-20.3 cm) high. These shoes became popular in Venice and throughout Europe, as a status symbol revealing wealth and social standing. During the 16th century, royalty started wearing high-heeled shoes to make them look taller or larger than life, such as Catherine de Medici or Mary I of England. By 1580, even men wore them, and a person with authority or wealth was often referred to as, ""well-heeled"".

Eventually the modern shoe, with a sewn-on sole, was devised. Since the 17th century, most leather shoes have used a sewn-on sole. This remains the standard for finer-quality dress shoes today. Until around 1800, welted rand shoes were commonly made without differentiation for the left or right foot. Such shoes are now referred to as ""straights"". Only gradually did the modern foot-specific shoe become standard. 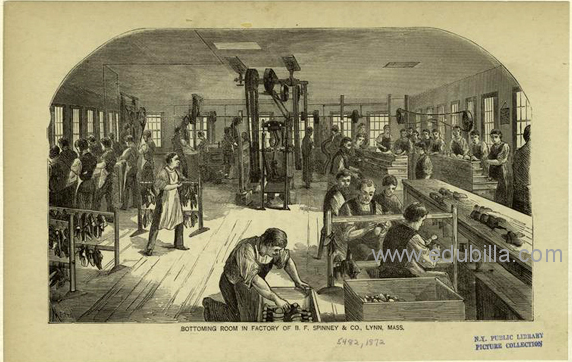 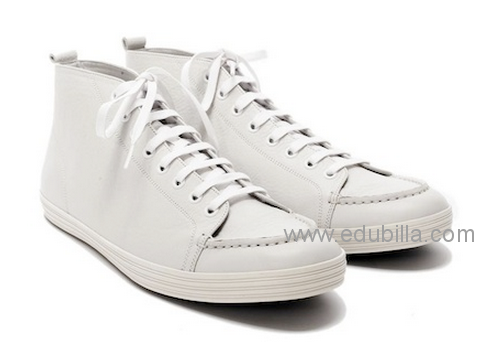