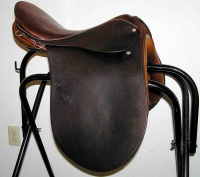 The saddle is a supportive structure for a rider or other load, fastened to an animal's back by a girth.The most common type is the equestrian saddle designed for a horse, but specialized saddles have been created for camels and other creatures.It is not known precisely when riders first began to use some sort of padding or protection, but a blanket attached by some form of surcingle or girth was probably the first ""saddle,"" followed later by more elaborate padded designs. The solid tree was a later invention, and though early stirrup designs predated the invention of the solid tree, the paired stirrup, which attached to the tree, was the last element of the saddle to reach the basic form that is still used today. Today, modern saddles come in a wide variety of styles, each designed for a specific equestrianism discipline, and require careful fit to both the rider and the horse. Proper saddle care can extend the useful life of a saddle, often for decades.

There is evidence, though disputed, that humans first began riding the horse not long after domestication, possibly as early as 4000 BC.The earliest known saddle-like equipment were fringed cloths or pads used by Assyrian cavalry around 700 BC. These were held on with a girth or surcingle that included breast straps and cruppers.From the earliest depictions, saddles became status symbols. To show off an individual's wealth and status, embellishments were added to saddles, including elaborate sewing and leather work, precious metals such as gold, carvings of wood and horn, and other ornamentation.

The North Iranian Eurasian nomads known in Europe as Scythians and in Asia as Saka developed an early form of saddle with a rudimentary frame, which included two parallel leather cushions, with girth attached to them, a pommel and cantle with detachable bone/horn/hardened leather facings, leather thongs, a crupper, breastplate, and a felt shabrack adorned with animal motifs. These were located in Pazyryk burials finds.These saddles, found in the Ukok Plateau, Siberia were dated to 500-400 BC.Iconographic evidence of a predecessor to the modern saddle has been found in the art of the ancient Armenians, Assyrians, and steppe nomads depicted on the Assyrian stone relief carvings from the time of Ashurnasirpal II. The Scythians also developed an early saddle that included padding and decorative embellishments.Though they had neither a solid tree nor stirrups, these early treeless saddles and pads provided protection and comfort to the rider, with a slight increase in security. The Sarmatians also used a padded treeless early saddle, possibly as early as the seventh century, BC. and depictions of Alexander the Great depict a saddle cloth.

Early solid-treed saddles were made of felt that covered a wooden frame. Asian designs appeared during the Han dynasty approximately 200 BC. One of the earliest solid-treed saddles in the west was the ""four horn"" design, first used by the Romans as early as the 1st century BC. Neither design had stirrups.

The development of the solid saddle tree was significant,it raised the rider above the horse's back, and distributed the rider's weight on either side of the animal's spine instead of pinpointing pressure at the rider's seat bones, reducing the pressure (e.g. pounds per square inch or kilopascals) on any one part of the horse's back, thus greatly increasing the comfort of the horse and prolonging its useful life. The invention of the solid saddle tree also allowed development of the true stirrup as it is known today.Without a solid tree, the rider's weight in the stirrups creates abnormal pressure points and makes the horse's back sore. Thermography studies on ""treeless"" and flexible tree saddle designs have found that there is considerable friction across the center line of a horse's back. 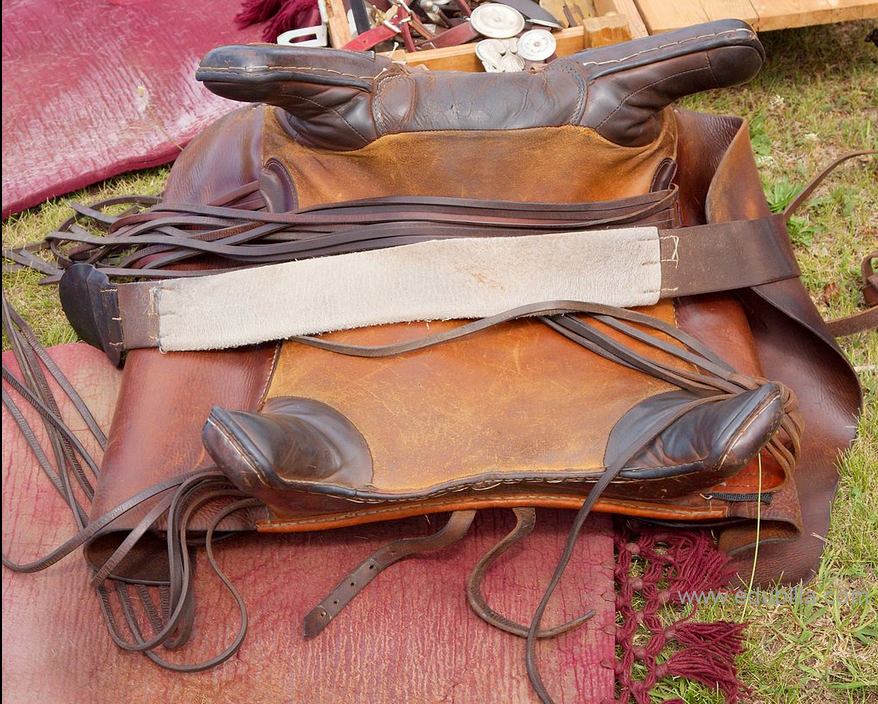 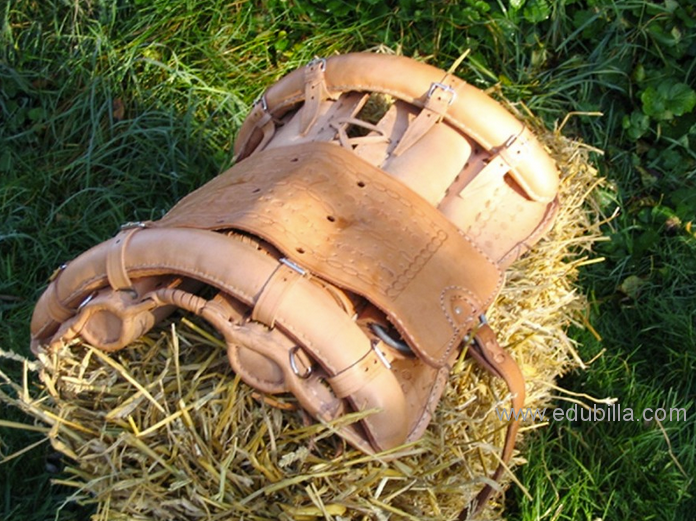