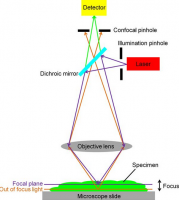 Confocal microscopy is an optical imaging technique for increasing optical resolution and contrast of a micrograph by means of adding a spatial pinhole placed at the confocal plane of the lens to eliminate out-of-focus light.It enables the reconstruction of three-dimensional structures from the obtained images. This technique has gained popularity in the scientific and industrial communities and typical applications are in life sciences, semiconductor inspection and materials science.

About 8-9 years ago, two investigators at Cambridge, Brad Amos and John White were attempting to look at the mitotic divisions in the first few divisions in embryos of C. elegans. They were doing antitubulin immunofluorescence and were trying to determine the cleavage planes of the cells, but were frustrated in their attempt in that the majority of the fluorescence they observed was out of focus no matter how much they adjusted the focus. They looked at the technique called confocal imaging which was first proposed by Nipkow and pioneered by a postdoc at Harvard named Minsky who made the first stage scanning confocal microscope in 1957. His microscope was commercially unfeasable because the technology needed to produce useful images was not available at the time. In 1986-87, a confocal microscope with the capabilities of producing very useful images could be built by combining the technologies of the laser, the computer, and microelectronics. Amos and White built the first prototype incorporating the technologies and obtained much better in-focus confocal images of the C. elegans embryos.

The principle of confocal imaging was patented in 1957 by Marvin Minsky and aims to overcome some limitations of traditional wide-field fluorescence microscopes. In a conventional (i.e., wide-field) fluorescence microscope, the entire specimen is flooded evenly in light from a light source. All parts of the specimen in the optical path are excited at the same time and the resulting fluorescence is detected by the microscope's photodetector or camera including a large unfocused background part. In contrast, a confocal microscope uses point illumination and a pinhole in an optically conjugate plane in front of the detector to eliminate out-of-focus signal - the name "confocal" stems from this configuration. As only light produced by fluorescence very close to the focal plane can be detected, the image's optical resolution, particularly in the sample depth direction, is much better than that of wide-field microscopes. However, as much of the light from sample fluorescence is blocked at the pinhole, this increased resolution is at the cost of decreased signal intensity – so long exposures are often required.

As only one point in the sample is illuminated at a time, 2D or 3D imaging requires scanning over a regular raster (i.e., a rectangular pattern of parallel scanning lines) in the specimen. The achievable thickness of the focal plane is defined mostly by the wavelength of the used light divided by the numerical aperture of the objective lens, but also by the optical properties of the specimen. The thin optical sectioning possible makes these types of microscopes particularly good at 3D imaging and surface profiling of samples. 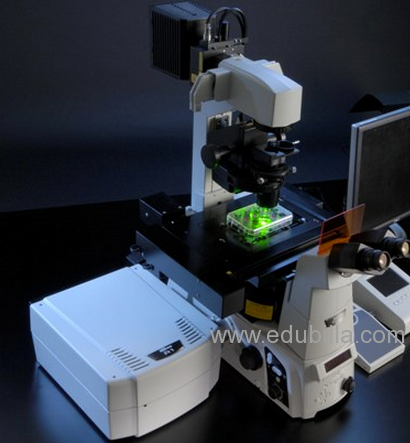