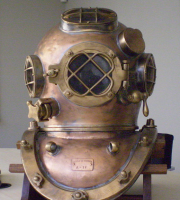 A standard diving dress consists of a metallic (copper and brass or bronze) diving helmet, an airline or hose from a surface supplied diving air pump, a canvas diving suit, diving knife and weighted boots.An important part of the equipment is the lead weights, generally on the chest, back and shoes, to counteract the buoyancy of the helmet and diving suit.

This type of diving equipment is also known as hard-hat equipment or a "John Brown" rig, so-called after the British company that built many of the helmets (Siebe Gorman and Heinke). In the United States, the dominant makers were DESCO, Morse, Miller-Dunn and Shreader and it is sometimes known as a "Diver Dan" outfit, from the television show of the same name. It was commonly used for underwater civil engineering, commercial diving, pearl shell diving and naval diving.

In 1405, Konrad Kyeser describes a diving dress made of a leather jacket and metal helmet with two glass windows. The jacket and helmet were lined by sponge to "retain the air" and a leather pipe was connected to a bag of air.A diving suit design was illustrated in a book by Vegetius in 1511.

Borelli designed diving equipment that consisted of a metal helmet, a pipe to "regenerate" air, a leather suit, and a means of controlling the diver's buoyancy.In 1690, Thames Divers, a short lived London diving company, gave public demonstrations of a Vegetius type shallow water diving dress.Klingert designed a full diving dress in 1797. This design consisted of a large metal helmet and similarly large metal belt connected by leather jacket and pants.

The first successful diving helmets were produced by the brothers Charles and John Deane in the 1820s.Inspired by a fire accident he witnessed in a stable in England,he designed and patented a "Smoke Helmet" to be used by firemen in smoke-filled areas in 1823. The apparatus comprised a copper helmet with an attached flexible collar and garment. A long leather hose attached to the rear of the helmet was to be used to supply air - the original concept being that it would be pumped using a double bellows. A short pipe allowed breathed air to escape. The garment was constructed from leather or airtight cloth, secured by straps.

The brothers had insufficient funds to build the equipment themselves, so they sold the patent to their employer, Edward Barnard. It was not until 1827 that the first smoke helmets were built, by German-born British engineer Augustus Siebe. In 1828 they decided to find another application for their device and converted it into a diving helmet. They marketed the helmet with a loosely attached "diving suit" so that a diver could perform salvage work but only in a full vertical position, otherwise water entered the suit.

In 1829 the Deane brothers sailed from Whitstable for trials of their new underwater apparatus, establishing the diving industry in the town. In 1834 Charles used his diving helmet and suit in a successful attempt on the wreck of Royal George at Spithead, during which he recovered 28 of the ship's cannon. In 1836, John Deane recovered from the discovered Mary Rose shipwreck timbers, guns, longbows, and other items.

By 1836 the Deane brothers had produced the world's first diving manual, Method of Using Deane's Patent Diving Apparatus which explained in detail the workings of the apparatus and pump, plus safety precautions.

In the 1830s the Deane brothers asked Siebe to apply his skill to improve their underwater helmet design.Expanding on improvements already made by another engineer, George Edwards, Siebe produced his own design; a helmet fitted to a full length watertight canvas diving suit. The real success of the equipment was a valve in the helmet that meant that it could not flood no matter how the diver moved. This resulted in safer and more efficient underwater work.

Siebe introduced various modifications on his diving dress design to accommodate the requirements of the salvage team on the wreck of the HMS Royal George, including making the helmet be detachable from the corset; his improved design gave rise to the typical standard diving dress which revolutionised underwater civil engineering, underwater salvage, commercial diving and naval diving.

Modern diving helmets are made of stainless steel, fiberglass, or other strong and lightweight material. The copper helmets and standard diving dress are still widely used in poorer parts of the world, but have largely been superseded by lighter and more comfortable equipment. 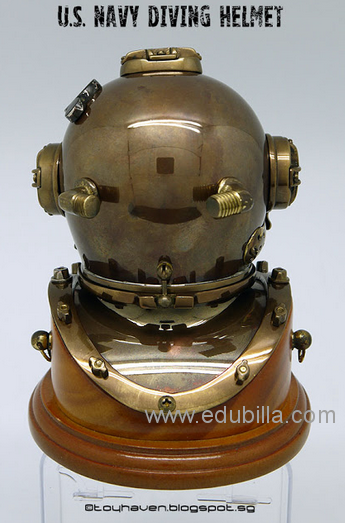 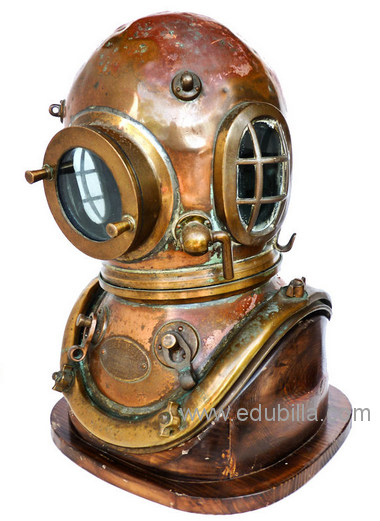