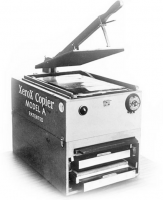 Xerography is a dry photocopying technique invented by Chester Carlson in 1938, for which he was awarded U.S. Patent 2,297,691 on October 6, 1942. Carlson originally called his invention electrophotography. It was later renamed xerography.

By 1948, Haloid realized that it would have to make a public announcement about electrophotography in order to retain its claims to the technology. However, the term electrophotography troubled Haloid; for one thing, its use of the term "photography" invited unwelcome comparisons with traditional duplicating technologies. After considering several options, Haloid chose a term invented by a public-relations employee at Battelle, who had asked a classics professor at Ohio State University for ideas. The professor suggested the term xerography—formed by combining the Greek words xeros ("dry") and graphein ("writing"). Carlson was not fond of the name, but Haloid's Wilson liked it, and so Haloid's board of directors voted to adopt it. The company's patent department wanted to trademark "xerography;" Haloid's head of sales and advertising, John Hartnett, vetoed the idea: "Don't do that. We want people to use the word."

On October 22, 1948, ten years to the day after that first microscope slide was copied, the Haloid Company made the first public announcement of xerography. In 1949, it shipped the first commercial photocopier: the XeroX Model A Copier, known inside the company as the "Ox Box." The Model A was difficult to use, requiring thirty-nine steps to make a copy, as the process was mostly manual. The product would likely have been a failure, except that it turned out to be a good way to make paper masters for offset printing presses, even with the difficulty of use. Sales of the Model A to the printing departments of companies like Ford Motor Company kept the product alive.

Before the Model A, in order to make a paper lithographic master for a lithographic press like the Multigraph 1250, one had two choices: Type up a new master using wax-coated carbon paper on a special master sheet, or use a metal plate coated with a modified silver halide photographic emulsion. If retyping the document was not feasible, the photographic method could be used, but it was slow, expensive, and messy. Because the Model A's toner repelled water but attracted oil-based inks, a lithographic master could be made easily by simply making a copy of the document with the Model A onto a blank paper master. It reduced the cost of creating a lithographic master for an existing document from three dollars to less than forty cents. Ford saved so much money by using the Model A that the savings were specifically mentioned in one of Ford's annual reports.

After the Model A, Haloid released a number of xerographic copiers to the market, but none yet particularly easy to use. Meanwhile, competitors such as Kodak and 3M brought out their own copying devices using other technologies. Kodak's Verifax, for instance, could sit on one side of a desk and sold for $100; Haloid's competing machines were more expensive and substantially larger.

In 1955, Haloid signed a new agreement with Battelle granting it full title to Carlson's xerography patents, in exchange for fifty thousand shares of Haloid stock.Carlson received forty percent of the cash and stock from that deal, due to his agreement with Battelle.That same year, the British motion picture company Rank Organisation was looking for a product to sit alongside a small business it had making camera lenses. Thomas A Law, who was the head of the business, found his answer in a scientific magazine he picked up by chance. He read about an invention that could produce copies of documents as good as the original. Mr Law tracked down the backers – Haloid. In order to exploit those patents in Europe, Haloid partnered with the Rank Organisation in a joint venture called Rank Xerox.As photocopying took the world by storm, so did Rank’s profits. According to Graham Dowson, Rank’s Managing Director in 1956, it was “a stroke of luck that turned out to be a touch of genius … If Tom Law had not seen that magazine, we would not have known about xerography – or at least not before it was too late".

Haloid needed to grow, and its existing offices in Rochester were old and scattered. In 1955, the company purchased a large parcel of land in the Rochester suburb of Webster, New York; this site would eventually become the company's main research-and-development campus.

Haloid's CEO, Joseph Wilson, had decided Haloid needed a new name as early as 1954. After years of debate within the company, the board approved a name change to "Haloid Xerox" in 1958, reflecting the fact that xerography was now the company's main line of business.

The first device recognizable as a modern photocopier was the Xerox 914. Although large and crude by modern standards, it allowed an operator to place an original on a sheet of glass, press a button, and receive a copy on plain paper. Manufactured in a leased building off Orchard Street in Rochester, the 914 was introduced to the market at the Sherry Netherland Hotel in New York City on September 16, 1959. Even plagued with early problems—of the two demonstration units at the hotel, one caught fire, and one worked fine—the Xerox 914 became massively successful. Between 1959, when the Model 914 first shipped, and 1961, Haloid Xerox's revenues nearly doubled.

The 914's success was not only due to its relative ease of use, its design (that, unlike competing copiers, carried no risk of damage to the original), and its low operating costs compared to other machines that required special paper; Haloid Xerox's decision to rent the 914—at the price of $25 per month, plus the cost of copies at four cents each with a minimum of $49 per month—made it vastly more affordable than a similar competing copier.

In 1961, because of the success of the Xerox 914, the company changed its name again, to Xerox Corporation.

For Carlson, the commercial success of the Xerox 914 was the culmination of his life's work: a device that could quickly and cheaply make an exact copy of an existing document. After the 914 went into production, Carlson's involvement with Xerox declined as he began pursuing his philanthropic interests. 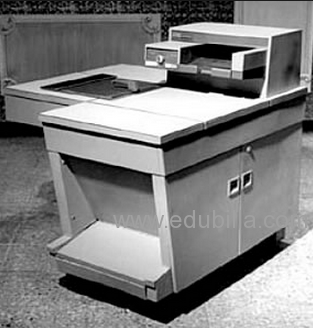 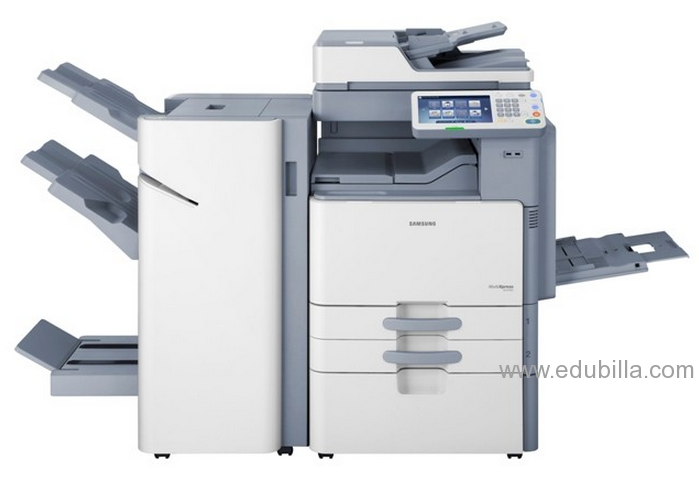