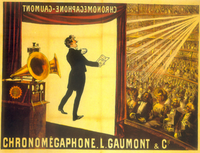 A sound film is a motion picture with synchronized sound, or sound technologically coupled to image, as opposed to a silent film.

In 1919, American inventor Lee De Forest was awarded several patents that would lead to the first optical sound-on-film technology with commercial application. In De Forest's system, the sound track was photographically recorded on to the side of the strip of motion picture film to create a composite, or "married", print. If proper synchronization of sound and picture was achieved in recording, it could be absolutely counted on in playback. Over the next four years, he improved his system with the help of equipment and patents licensed from another American inventor in the field, Theodore Case.

At the University of Illinois, Polish-born research engineer Joseph Tykoci?ski-Tykociner was working independently on a similar process. On June 9, 1922, he gave the first reported U.S. demonstration of a sound-on-film motion picture to members of the American Institute of Electrical Engineers.As with Lauste and Tigerstedt, Tykociner's system would never be taken advantage of commercially; however, De Forest's soon would.

On April 15, 1923, at New York City's Rivoli Theater, came the first commercial screening of motion pictures with sound-on-film, the future standard: a set of shorts under the banner of De Forest Phonofilms, accompanying a silent feature.That June, De Forest entered into an extended legal battle with an employee, Freeman Harrison Owens, for title to one of the crucial Phonofilm patents. Although De Forest ultimately won the case in the courts, Owens is today recognized as a central innovator in the field.The following year, De Forest's studio released the first commercial dramatic film shot as a talking picture—the two-reeler Love's Old Sweet Song, directed by J. Searle Dawley and featuring Una Merkel.However, phonofilm's stock in trade was not original dramas but celebrity documentaries, popular music acts, and comedy performances. President Calvin Coolidge, opera singer Abbie Mitchell, and vaudeville stars such as Phil Baker, Ben Bernie, Eddie Cantor and Oscar Levant appeared in the firm's pictures. Hollywood remained suspicious, even fearful, of the new technology. As Photoplay editor James Quirk put it in March 1924, "Talking pictures are perfected, says Dr. Lee De Forest. So is castor oil."De Forest's process continued to be used through 1927 in the United States for dozens of short Phonofilms; in the UK it was employed a few years longer for both shorts and features by British Sound Film Productions, a subsidiary of British Talking Pictures, which purchased the primary Phonofilm assets. By the end of 1930, the Phonofilm business would be liquidated.

In Europe, others were also working on the development of sound-on-film. In 1919, the same year that DeForest received his first patents in the field, three German inventors patented the Tri-Ergon sound system. On September 17, 1922, the Tri-Ergon group gave a public screening of sound-on-film productions—including a dramatic talkie, Der Brandstifter (The Arsonist) —before an invited audience at the Alhambra Kino in Berlin.By the end of the decade, Tri-Ergon would be the dominant European sound system. In 1923, two Danish engineers, Axel Petersen and Arnold Poulsen, patented a system in which sound was recorded on a separate filmstrip running parallel with the image reel. Gaumont would license and briefly put the technology to commercial use under the name Cinéphone.

It was domestic competition, however, that led to Phonofilm's eclipse. By September 1925, De Forest and Case's working arrangement had fallen through. The following July, Case joined with Fox Film, Hollywood's third largest studio, to found the Fox-Case Corporation. The system developed by Case and his assistant, Earl Sponable, given the name Movietone, thus became the first viable sound-on-film technology controlled by a Hollywood movie studio. The following year, Fox purchased the North American rights to the Tri-Ergon system, though the company found it inferior to Movietone and virtually impossible to integrate the two different systems to advantage.In 1927, as well, Fox retained the services of Freeman Owens, who had particular expertise in constructing cameras for synch-sound film. 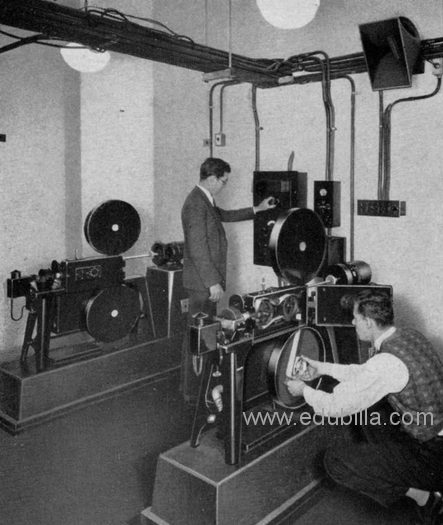 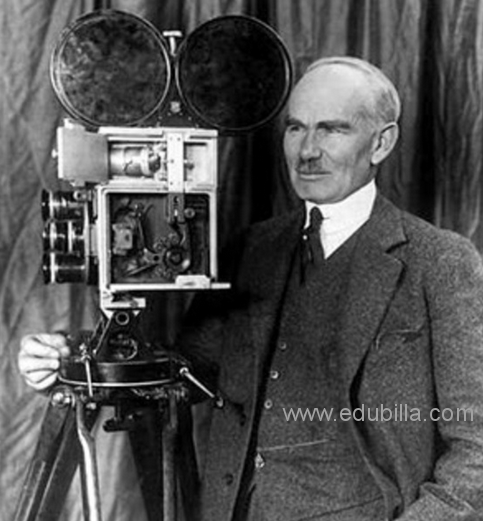