The daguerreotype was not the first photographic process to be invented; however, it was the first to come into widespread use during the early 1840s having been invented sometime around 1835. Later processes which were less expensive and produced more easily viewed images had almost entirely replaced it by the early 1860s. A small-scale revival of daguerreotype among photographers interested in historical processes was increasingly apparent during the 1980s and 1990s and has persisted into the 2010s.

The distinguishing visual characteristics of a daguerreotype are that the image is on a bright (ignoring any areas of tarnish) mirror-like surface of metallic silver and it will appear either positive or negative depending on the lighting conditions and whether a light or dark background is being reflected in the metal. From certain angles the image cannot be seen at all.

Several types of antique images, particularly ambrotypes and tintypes but sometimes even old prints on paper, are commonly misidentified as daguerreotypes, especially if they are in the small, ornamented cases in which daguerreotypes were usually housed. The name "daguerreotype" refers correctly to only one very distinctive image type and medium, produced by a specific photographic process that was in wide use only from the early 1840s to the late 1850s.

At the end of a rapturous review of a Diorama spectacle entitled La Vallée de Goldau in the Journal des artistes dated 27 September 1835, the following news item appeared:

"It is said that Daguerre has found a way to collect, the image produced by the camera obscura on plates that he specially prepares; so that a portrait, a landscape or any view, projected on to this plate by the ordinary camera obscura leaves its imprint in light and shade, as well as the most perfect of all drawings ... a contraption placed over this image will preserve it for an indefinite time ... in all likelihood, never before have the physical sciences presented a miracle to match this one."

(In fact, the Journal des artistes writer was being somewhat optimistic because in 1835 Daguerre had not perfected a method to fix the image satisfactorily, and portraits required further developments to reduce exposure times).

A further clue to fixing the date of invention of the process is that when the Paris correspondent of the London periodical The Athenaeum reported the public announcement of the daguerreotype in 1839, he mentioned that the daguerreotypes now being produced were considerably better than the ones he had seen "four years earlier".

Since the late Renaissance, artists and inventors had searched for a mechanical method of capturing visual scenes.Previously, using the camera obscura, artists would manually trace what they saw, or use the optical image in the camera as a basis for solving the problems of perspective and parallax, and deciding color values. The camera obscura's optical reduction of a real scene in three-dimensional space to a flat rendition in two dimensions influenced western art, so that at one point, it was thought that images based on optical geometry (perspective) belonged to a more advanced civilization. Later, with the advent of Modernism, the absence of perspective in oriental art from China, Japan and in Persian miniatures was revalued.

In the early seventeenth century, the Italian physician and chemist Angelo Sala wrote that powdered silver nitrate was blackened by the sun, but did not find any practical application of the phenomenon.

Previous discoveries of photosensitive methods and substances—including silver nitrate by Albertus Magnus in the 13th century,a silver and chalk mixture by Johann Heinrich Schulze in 1724,and Joseph Niépce's bitumen-based heliography in 1822—contributed to development of the daguerreotype.

The first reliably documented attempt to capture the image formed in a camera obscura was made by Thomas Wedgwood as early as the 1790s, but according to an 1802 account of his work by Sir Humphry Davy:

"The images formed by means of a camera obscura have been found too faint to produce, in any moderate time, an effect upon the nitrate of silver. To copy these images was the first object of Mr. Wedgwood in his researches on the subject, and for this purpose he first used the nitrate of silver, which was mentioned to him by a friend, as a substance very sensible to the influence of light; but all his numerous experiments as to their primary end proved unsuccessful."

In 1829 French artist and chemist Louis Jacques-Mandé Daguerre, contributing a cutting edge camera design, partnered with Niépce, a leader in photochemistry, to further develop their technologies.The two men came into contact through their optician, Chevalier, who supplied lenses for their camerae obscurae.

Niépce's aim originally had been to find a method to reproduce prints and drawings for lithography. He had started out experimenting with light sensitive materials and had made a contact print from a drawing and then went on to successfully make the first photomechanical record of an image in a camera obscura—the world's first photograph. Niépce's method was to coat a pewter plate with bitumen of Judea (asphalt) and the action of the light differentially hardened the bitumen. The plate was washed with a mixture of oil of lavender and turpentine leaving a relief image. Niépce called his process heliography and the exposure for the first successful photograph was eight hours.

After Niépce's 1833 death, Daguerre continued to research the chemistry and mechanics of recording images by coating copper plates with iodized silver.Early experiments required hours of exposure in the camera to produce visible results. Modern photo-historians consider the stories of Daguerre discovering mercury development by accident because of a bowl of mercury left in a cupboard, or, alternatively, a broken thermometer to be spurious.

Jean-Baptiste Dumas, who was president of the National Society for the Encouragement of Science and a chemist, put his laboratory at Daguerre's disposal, which was fortunate, according to Eder, who says Daguerre was not versed in chemistry; and it was Dumas who suggested Daguerre use sodium hyposulfite, discovered by Herschel in 1819, as a fixer to dissolve the unexposed silver salts.

Much of Daguerre's early work was destroyed in a fire: "Until 1839 Daguerre resided in Paris, living at 15 Rue de Marais, the premises of the Diorama from which he derived his income. On 8 March 1839 the house was burned to the ground, and with it the bulk of his early experimental works including the experimental picture which Daguerre made with Arago in order to instruct him in the method and importance of his invention."Malcom Daniel points out that "fewer than twenty-five securely attributed photographs by Daguerre survive—a mere handful of still lifes, Parisian views, and portraits from the dawn of photography."

François Arago announced the daguerreotype process at a joint meeting of the French Academy of Sciences and the Académie des Beaux-Arts on January 9, 1839. Daguerre was present, but complained of a sore throat. Later that year William Fox Talbot announced his silver chloride "sensitive paper" process.Together, these announcements mark 1839 as the year photography was born.although Daguerre had been producing daguerreotypes and showing them to people since 1835 (!)

Daguerre did not patent and profit from his invention in the usual way. Instead, it was arranged that the French government would acquire the rights in exchange for a lifetime pension. The government would then present the daguerreotype process "free to the world" as a gift, which it did on August 19, 1839. However, on August 14, 1839, five days previously, Miles Berry, a patent agent acting on Daguerre's behalf filed for patent No. 8194 of 1839: A New or Improved Method of Obtaining the Spontaneous Reproduction of all the Images Received in the Focus of the Camera Obscura. The patent applied to England, Wales, and the town of Berwick-upon-Tweed, and in all her Majesty's Colonies and Plantations abroad.This was the usual wording of English patent specifications before 1852. It was only after the 1852 Act, which unified the patent systems of England, Ireland and Scotland, that a single patent protection was automatically extended to the whole of the British Isles, including the Channel Isles and the Isle of Man.

For some reason the patent in Scotland was not enforced. Consequently, England became the only country in which the purchase of a license was legally required to make and sell daguerreotypes.

François Arago noted that early attempts at photography, which required very long exposures, could not capture detail properly because of the movement of the sun, so that shadows came from different directions during the course of these long exposures. 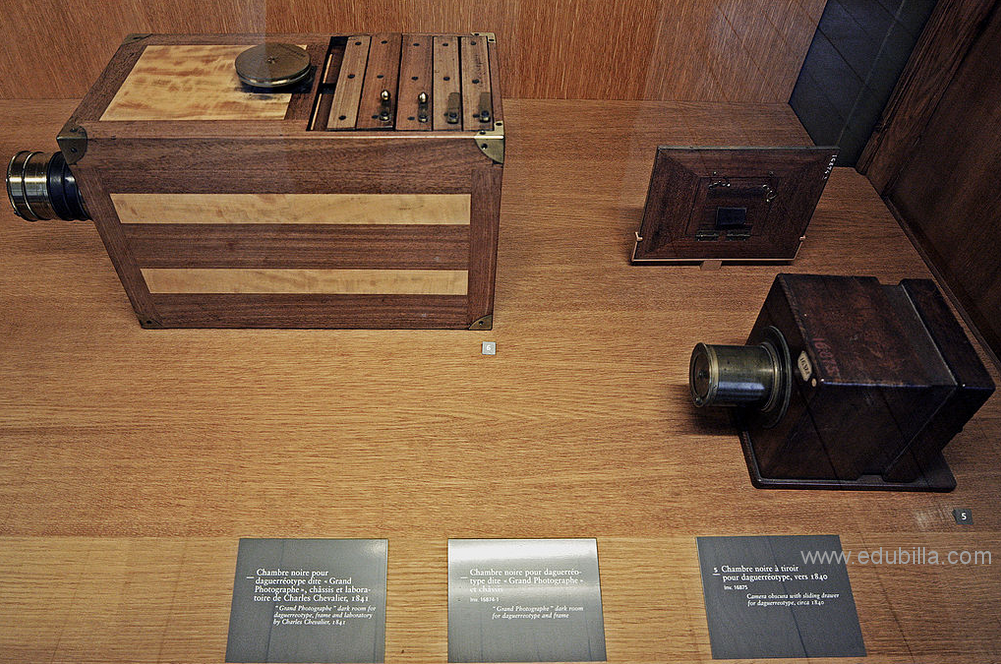 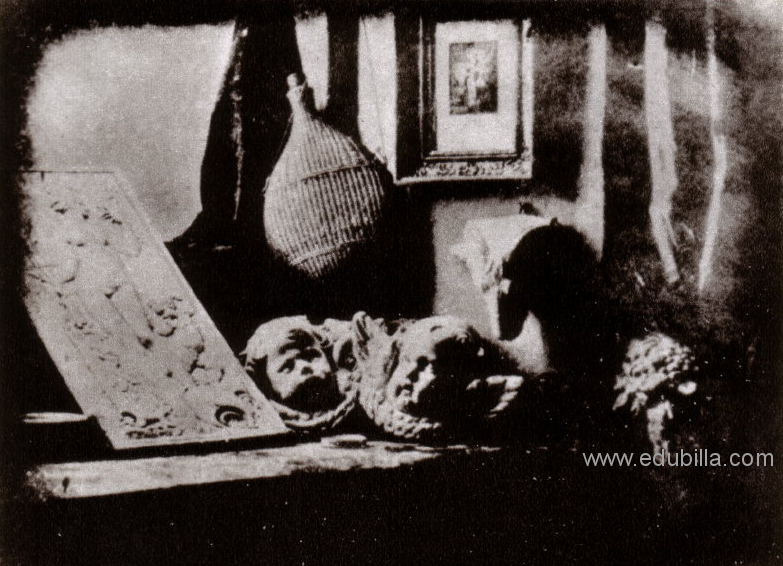