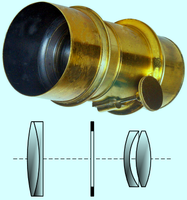 A camera lens is an optical lens or assembly of lenses used in conjunction with a camera body and mechanism to make images of objects either on photographic film or on other media capable of storing an image chemically or electronically.

There is no major difference in principle between a lens used for a still camera, a video camera, a telescope, a microscope, or other apparatus, but the detailed design and construction are different. A lens may be permanently fixed to a camera, or it may be interchangeable with lenses of different focal lengths, apertures, and other properties.

While in principle a simple convex lens will suffice, in practice a compound lens made up of a number of optical lens elements is required to correct (as much as possible) the many optical aberrations that arise. Some aberrations will be present in any lens system. It is the job of the lens designer to balance these out and produce a design that is suitable for photographic use and possibly mass production.

The invention of the camera in the early 19th century has led to a large array of lens designs intended for photography. The problems of photographic lens design, creating a lens for a task that would cover a large flat image plane, were well known even before the invention of photography due to the development of lenses to work with the focal plane of the camera obscura, a device for projecting images used as a novelty and an artist's drawing aid that had been around for hundreds of years. Since the invention of photography many types of lenses have been tried. The succession of designs was never uniform since an older design that performed a task the photographer needed (such as working better portrait versus landscape, working at the wavelength of light the film collected, etc.) would still be used in unison with newer designs. Even today the job the lens needs to do, the laws of physics, the limits of engineering, as well as the practical considerations of size, weight and cost, means there are many designs available.

Because the Achromat Landscape lens was quite slow the French Society for the Encouragement of National Industry offered an international prize in 1840 for a faster lens. Joseph Petzval (of modern Slovakia) was a mathematics professor without any optical physics experience but, with the aid of several human computers of the Austro-Hungarian army, took up the challenge of producing a lens fast enough for a daguerreotype portrait.

He came up with the Petzval Portrait (modern Austria) in 1840, a four element formula consisting of a front cemented achromat and a rear air-spaced achromat that, at f/3.6, was the first wide aperture, portrait lens. It was appropriate for one to two minute shaded outdoors daguerreotype exposures. With the faster colloidion (wet plate) process of 1851, it could take one-to-two minute indoor portraits. Due to national chauvinism, the Petzval did not win the prize, despite being far superior to all other entries.

A 150mm focal length Petzval lens was fitted to a conical metal Voigtländer (modern Austria) camera taking circular daguerreotypes in 1841. The Voigtländer-Petzval was the first camera and lens specifically designed to take photographs, instead of being a modified artist's camera obscura.The Petzval Portrait was the dominant portrait lens for nearly a century. It had what would now be considered severe field curvature and astigmatism. It was centrally sharp (about 20° field of view, 10° for critical applications), but quickly drifted out of focus to a soft outer field, producing a pleasant halo effect around the subject. The Petzval Portrait remains popular as a projection lens where the narrow angles involved means the field curvature does not matter.

The Portrait was illegally copied by every lens maker and Petzval had a nasty falling out with Peter Voigtländer over unpayable royalties and died an embittered old man.Although the Portrait was the first mathematically computed lens formula,trial and error would continue to dominate photographic lens design for another half century, despite well established physical mathematics dating from 1856,working for Hugo Adolph Steinheil), to the retrospective detriment of lens advancement. 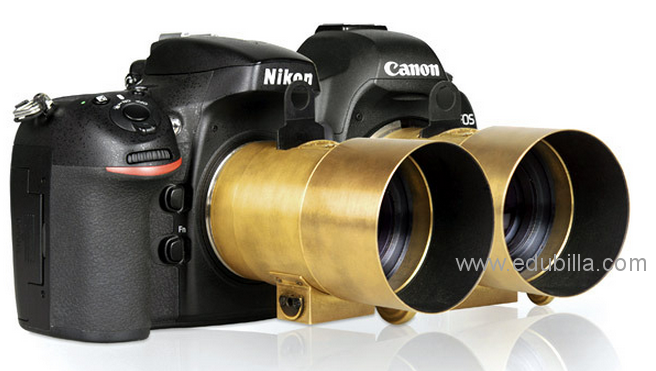 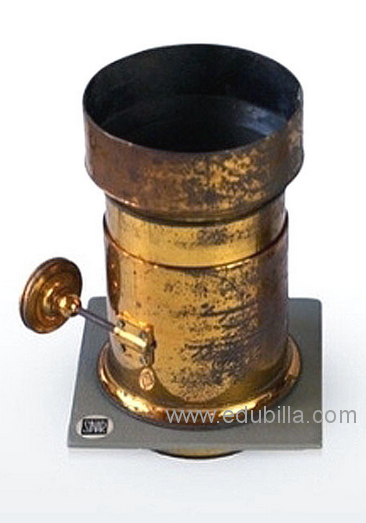