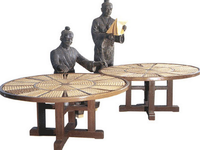 Movable type is the system of printing and typography that uses movable components to reproduce the elements of a document (usually individual letters or punctuation).

The world's first known movable type system for printing was made of ceramic materials and created in China around A.D 1040. by Bi Sheng (990–1051) during the Northern Song Dynasty (960–1127);When this technology spread to Korea during the Goryeo Dynasty in 1234, they made the metal movable-type system for printing. This led to the printing of the Jikji in 1377, the oldest extant movable metal print book. The diffusion of both movable-type systems was, however, limited they were expensive, and required an enormous amount of labour involved in manipulating the thousands of ceramic tablets, or in the case of Korea, metal tablets required for scripts based on the Chinese writing system, which have thousands of characters.

During the Ch'ing-li period (1041-1048) a commoner named Pi Sheng first invented the movable type. Each type was made of moistened clay upon which was carved one Chinese character. The portion that formed the character was as thin as the edge of a small coin. The type was then hardened by fire and thus made permanent.

To proceed with the process of printing, a printer smeared an iron plate with a mixture of turpentine, resin, wax, and burned paper ash. Pieces of movable type were then placed on the plate closely together and were arranged in such a way as to reflect the text of a book to be printed. They were confined within the plate by an iron fence fastened tightly to the plate.

The iron plate was then placed on a gentle fire in order to melt the mixture type so that the heads of all pieces would appear on the same level. The plate was then ready for printing. For each Chinese character there were several pieces of type. The number reached twenty or more for each of such commonly used characters such as chin and yeh. The avaiability of a large number of the same piece of type was necessitated by the repeated occurrences of the same Chinese character on the page of a book to be printed. When pieces of type were not in use, they were covered with paper for the purpose of protection, were grouped together according to rhymes, and were stored away in wooden frames. Occasionally there were uncommon Chinese characters that had not been prepared in advance. In such cases, the printer had to carve them on the spot, harden them by fire, and make them fit for printing in a minimum amount of time.

The fact that moistened clay, instead of wood, was used as the material to make movable type was because wood was subject to change and tended to distort the Chinese character carved on it. When exposed to moisture, the surface of a piece of wooden type became uneven, and the type itself became thus unusable. Moreover, it was extremely difficult to detach it when this particular piece of type had to be used somewhere else. The movable type made of clay, on the other hand, encountered no such difficulties. When exposed to a gentle fire which melted the mixture that glued it to the plate, it requred only a gentle push by the hand before it easily came loose from the plate. 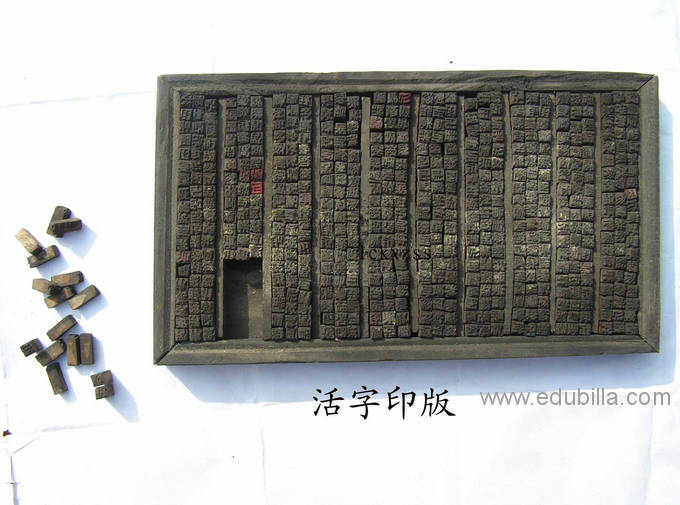