The history of the single-lens reflex camera (SLR) begins with the use of a reflex mirror in a camera obscura described in 1676, but it took a long time for the design to succeed for photographic cameras: the first patent was granted in 1861, and the first cameras were produced in 1884 but while elegantly simple in concept, they were very complex in practice. One by one these complexities were overcome as optical and mechanical technology advanced, and in the 1960s the SLR camera became the preferred design for many high-end camera formats.

The advent of digital point-and-shoot cameras in 1990s through the 2010s with LCD viewfinder displays reduced the appeal of the SLR for the low end of the market. The mirrorless interchangeable-lens camera is increasingly challenging the mid price range market. But the SLR remains the camera design of choice for most professional and ambitious amateur photographers.

The photographic single-lens reflex camera (SLR) was invented in 1861 by Thomas Sutton, a photography author and camera inventor who ran a photography related company together with Louis Désiré Blanquart-Evrard on Jersey. Only a few of his SLR's were made.The first production SLR with a brand name was Calvin Rae Smith's Monocular Duplex (USA, 1884). Other early SLR cameras were constructed for example by Louis van Neck (Belgium, 1889), Thomas Rudolphus Dallmeyer (England, 1894) and Max Steckelmann (Germany, 1896), and Graflex of the United States and Konishi in Japan produced SLR cameras as early as 1898 and 1907 respectively. These first SLRs were large format cameras.While SLR cameras were not very popular at the time, they proved useful for some work. These cameras were used at waist level; the ground glass screen was viewed directly, using a large hood to keep out extraneous light. In most cases, the mirror had to be raised manually as a separate operation before the shutter could be operated.

Development of the 35 mm SLR

Early 35 mm SLR cameras had similar functionality to larger models, with a waist-level ground-glass viewfinder and a mirror which remained in the taking position—blacking out the viewfinder—after an exposure, returning when the film was wound on. Innovations which transformed the SLR were the pentaprism eye-level viewfinder and the instant-return mirror—the mirror flipped briefly up during exposure, immediately returning to the viewfinding position. The half-silvered fixed pellicle mirror, without even the brief blackout of the instant-return mirror, was innovative but did not become standard. Through-the-lens light-metering was an important advance.

General operation of a 35 mm SLR

A photographer using an SLR would view and focus with the lens diaphragm (aperture) fully open; he then had to adjust the aperture just before taking the picture.

Some lenses had manual diaphragms—the photographer had to take the camera down from his eye and look at the aperture ring to set it.

A "pre-set" diaphragm had two aperture rings next to each other: one could be set in advance to the aperture needed for the picture while the other ring controlled the diaphragm directly. Turning the second ring all the way clockwise gave full aperture; turn it all the way counterclockwise gave the preset shooting aperture, speeding up the process. Such lenses were commonly made into the 1960s.

A lens with an "automatic" diaphragm allows the photographer to forget about closing the diaphragm to shooting aperture; such diaphragms have been taken for granted for decades. Usually this means a pin or lever on the back of the lens is pushed or released by a part of the shutter release mechanism in the camera body; the external automatic diaphragms on lenses for Exakta and Miranda cameras were the exception to that. Some lenses had "semi-automatic" diaphragms that closed to shooting aperture like an automatic diaphragm but had to be re-opened manually with a flip of a ring on the lens.

When the shutter release is pressed the mirror flips up against the viewing screen, the diaphragm closes down (if automatic), the shutter opens and closes, the mirror returns to its 45-degree viewing position (on most or all 35 mm SLRs made since 1970) and the automatic diaphragm re-opens to full aperture.

Most but not all SLRs had shutters behind the mirror, next to the film; if the shutter was in or immediately behind the lens it had to be open before the photographer clicked the shutter and then had to close, then open, then close. 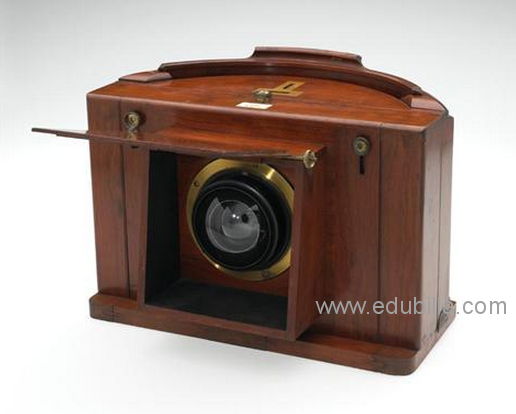 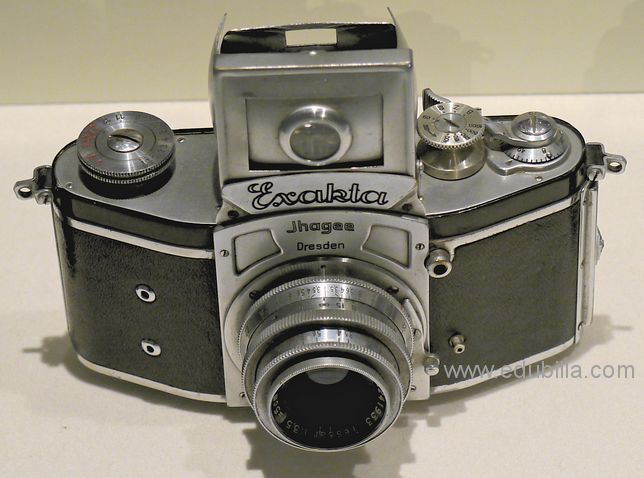