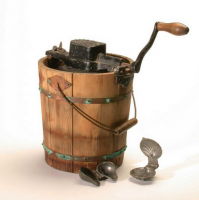 An ice cream maker has to simultaneously freeze the mixture while churning it so as to aerate the mixture and avoid ice crystals. As a result, most ice creams are ready to consume immediately. However, those containing alcohol must often be chilled further to attain a firm consistency.

Some machines, such as certain lower-priced countertop models, do require that the resulting mixture be frozen for additional time after churning is complete.

These machines usually comprise an outer bowl, and a smaller inner bowl with a hand-cranked mechanism which turns a paddle, sometimes called a dasher, to stir the mixture. The outer bowl is filled with a freezing mixture of salt and ice. Adding salt to the ice causes freezing-point depression. As salt melts the ice, the heat of fusion allows the ice to absorb heat from the ice cream mixture, which freezes the ice cream.

Some small manual units comprise a bowl with coolant filled hollow walls. These have a volume of approximately one pint (500ml). The paddle is often built into a plastic top. The mixture is poured into the frozen bowl and placed in a freezer. The paddles are hand-turned every ten minutes or so for a few hours until reaching the desired consistency and flavor. Nancy Johnson invented the first hand-cranked model in 1843. She then sold the patent to William Young, who marketed the machine as the "Johnson Patent Ice-Cream Freezer."

There are three types of electric ice cream machines. Each has an electric motor that drives the bowl or the paddle to stir the mixture. The major difference among the three is how the cooling is performed.

Counter-top machines use a double-walled bowl with a solution between the walls (typically distilled water and urea) that freezes below 32°F or 0°C. In a domestic freezer, this requires up to 24 hours before the machine is ready. Once frozen, the bowl is put into the machine, the mixture is added and the machine started. The paddles rotate, stirring the mixture as it gradually freezes through contact with the frozen bowl. After twenty to thirty minutes, the solution between the double walls thaws, and the ice cream freezes. This type of machine has the advantage of being relatively inexpensive; however, a pre-frozen bowl makes only one batch at a time. The bowl must be refrozen to make another batch. Multi-batches require extra bowls for the machine, which require extra freezer space.

Small freezer-unit machines sit inside the freezer (or the freezer part of the refrigerator) and operate similar to a food processor in slow-motion. Every few seconds, the paddles stir the mixture to prevent formation of large ice crystals. When the ice cream sufficiently freezes, the paddles automatically stop rotating and lift. Since the mixture is cooled in the freezer, it takes longer to freeze than other ice cream makers, which work by placing the ice cream bowl in direct contact with the cooling element. A disadvantage is that the freezer door has to be closed over the flat cord, which is plugged into the nearest power outlet. However, some modern refrigerators have a built-in ice-cream maker as an accessory or a specialized electrical outlet for freezer-unit machines. It is not necessary to pre-freeze this type of ice cream maker. However, some people feel that this type of machine produces a lower-quality ice cream because of its slow-motion method. Also available are cordless, battery-operated ice-cream makers that may be placed directly in the freezer, although these tend to require expensive non-rechargeable potassium batteries (most rechargeable batteries or regular alkaline cells perform very poorly at low temperature).

More expensive, and usually larger, machines have a freezing mechanism built in and do not require a bowl to be pre-chilled. A few minutes after starting the cooling system, the mixture can be poured in and the paddle started. As with coolant-bowl machines, ice cream is ready in twenty to thirty minutes depending on the quantity and recipe. These machines can be used immediately with no preparation, and they make any number of batches of ice cream without a delay between batches. Some of these machines cannot be moved without waiting twelve hours before use since moving the unit upsets coolant in the freezing system. These machines are normally kept in a permanently position ready for use making them impractical in smaller kitchens.

The fourth type of electric ice cream maker uses an outer tub filled with ice and salt for chilling. An inner canister holds the ice cream mixture and churn and scraper assembly. A high-speed electric motor, geared at approximately 75RPM, drives a mechanism that simultaneously rotates the canister, counter-rotates the scraper and holds the churn paddles stationary. As the canister turns, the ice cream mixture freezes against the inner wall of the canister. The counter-rotating scraper constantly removes the frozen product from the canister wall and returns it to the mixture. The continuing turning motion of the canister against the stationary churn paddles causes the mixture to become increasingly thick. Enough time, ice and salt produces a smooth "hard packed" ice cream. 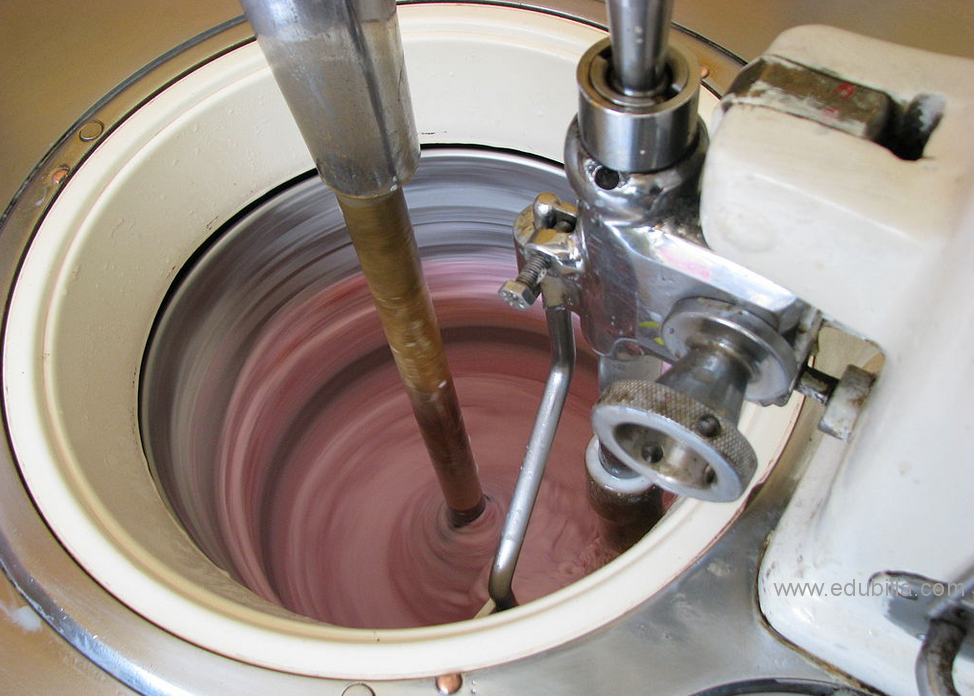 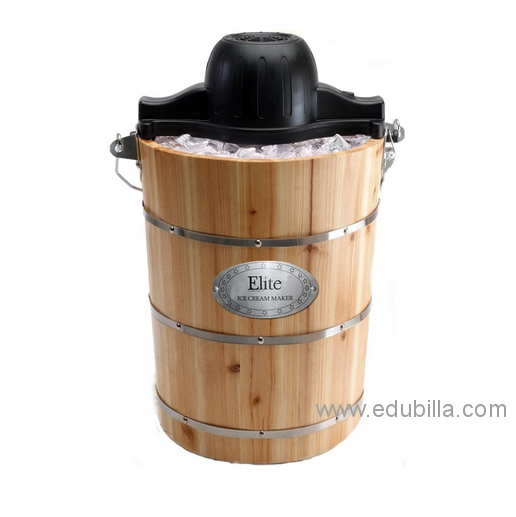