Gutenberg's early printing process, and what tests he may have made with movable type, are not known in great detail. His later Bibles were printed in such a way as to have required large quantities of type, some estimates suggesting as many as 100,000 individual sorts.Setting each page would take, perhaps, half a day, and considering all the work in loading the press, inking the type, pulling the impressions, hanging up the sheets, distributing the type, etc., it is thought that the Gutenberg–Fust shop might have employed as many as 25 craftsmen.

In the standard process of making type, a hard metal punch (made by punchcutting, with the letter carved back to front) is hammered into a softer copper bar, creating a matrix. This is then placed into a hand-held mould and a piece of type, or ""sort"", is cast by filling the mould with molten type-metal; this cools almost at once, and the resulting piece of type can be removed from the mould. The matrix can be reused to create hundreds, or thousands, of identical sorts so that the same character appearing anywhere within the book will appear very uniform, giving rise, over time, to the development of distinct styles of typefaces or fonts. After casting, the sorts are arranged into type-cases, and used to make up pages which are inked and printed, a procedure which can be repeated hundreds, or thousands, of times. The sorts can be reused in any combination, earning the process the name of ""movable type"".

The invention of the making of types with punch, matrix and mold has been widely attributed to Gutenberg. However, recent evidence suggests that Gutenberg's process was somewhat different. If he used the punch and matrix approach, all his letters should have been nearly identical, with some variations due to miscasting and inking. However, the type used in Gutenberg's earliest work shows other variations.

In 2001, the physicist Blaise Agüera y Arcas and Princeton librarian Paul Needham, used digital scans of a Papal bull in the Scheide Library, Princeton, to carefully compare the same letters (types) appearing in different parts of the printed text.The irregularities in Gutenberg's type, particularly in simple characters such as the hyphen, suggested that the variations could not have come from either ink smear or from wear and damage on the pieces of metal on the types themselves. While some identical types are clearly used on other pages, other variations, subjected to detailed image analysis, suggested that they could not have been produced from the same matrix. Transmitted light pictures of the page also appeared to reveal substructures in the type that could not arise from traditional punchcutting techniques. They hypothesized that the method may have involved impressing simple shapes to create alphabets in ""cuneiform"" style in a matrix made of some soft material, perhaps sand. Casting the type would destroy the mould, and the matrix would need to be recreated to make each additional sort. This could explain the variations in the type, as well as the substructures observed in the printed images.

Thus, they feel that ""the decisive factor for the birth of typography"", the use of reusable moulds for casting type, might have been a more progressive process than was previously thought.They suggest that the additional step of using the punch to create a mould that could be reused many times was not taken until twenty years later, in the 1470s. Others have not accepted some or all of their suggestions, and have interpreted the evidence in other ways, and the truth of the matter remains very uncertain.

A 1568 history by Hadrianus Junius of Holland claims that the basic idea of the movable type came to Gutenberg from Laurens Janszoon Coster via Fust, who was apprenticed to Coster in the 1430s and may have brought some of his equipment from Haarlem to Mainz. While Coster appears to have experimented with moulds and castable metal type, there is no evidence that he had actually printed anything with this technology. He was an inventor and a goldsmith. However, there is one indirect supporter of the claim that Coster might be the inventor. The author of the Cologne Chronicle of 1499 quotes Ulrich Zell, the first printer of Cologne, that printing was performed in Mainz in 1450, but that some type of printing of lower quality had previously occurred in the Netherlands. However, the chronicle does not mention the name of Coster,while it actually credits Gutenberg as the ""first inventor of printing"" in the very same passage (fol. 312). The first securely dated book by Dutch printers is from 1471,and the Coster connection is today regarded as a mere legend.

The 19th century printer and typefounder Fournier Le Jeune suggested that Gutenberg might not have been using type cast with a reusable matrix, but possibly wooden types that were carved individually. A similar suggestion was made by Nash in 2004.This remains possible, albeit entirely unproven.

It has also been questioned whether Gutenberg used movable types at all. In 2004, Italian professor Bruno Fabbiani claimed that examination of the 42-line Bible revealed an overlapping of letters, suggesting that Gutenberg did not in fact use movable type (individual cast characters) but rather used whole plates made from a system somewhat like a modern typewriter, whereby the letters were stamped successively into the plate and then printed. However, most specialists regard the occasional overlapping of type as caused by paper movement over pieces of type of slightly unequal height. 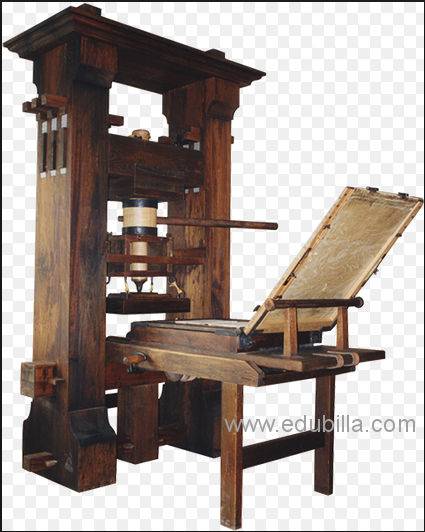 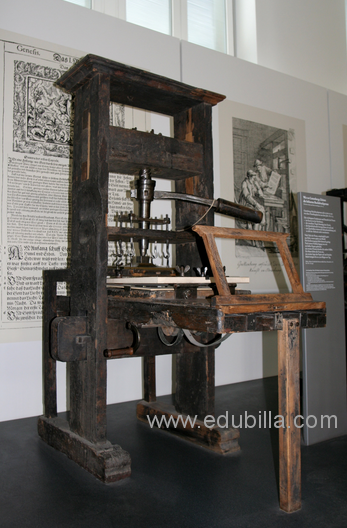