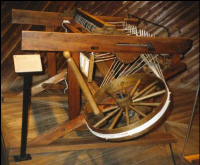 The spinning jenny is a multi-spindle spinning frame. It was invented in 1764 by James Hargreaves in Stanhill, Oswaldtwistle, Lancashire in England. The device reduced the amount of work needed to produce yarn, with a worker able to work eight or more spools at once. This grew to 120 as technology advanced.

The spinning jenny is attributed to James Hargreaves. He was born in Oswaldtwistle, near Blackburn, around 1720. Blackburn was a town with a population of about 5,000, known for the production of ""Blackburn greys,"" cloths of linen warp and cotton weft. They were usually sent to London to be printed.

At the time, cotton production could not keep up with demand, and Hargreaves spent some time considering how to improve the process. The flying shuttle (John Kay 1733) had increased yarn demand by the weavers by doubling their productivity,and now the spinning jenny could supply that demand by increasing the spinners' productivity even more. The machine produced coarse thread.

The idea was developed by Hargreaves as a metal frame with eight wooden spindles at one end. A set of eight rovings was attached to a beam on that frame. The rovings when extended passed through two horizontal bars of wood that could be clasped together. These bars could be drawn along the top of the frame by the spinner's left hand thus extending the thread. The spinner used his right hand to rapidly turn a wheel which caused all the spindles to revolve, and the thread to be spun. When the bars were returned, the thread wound onto the spindle. A pressing wire (faller) was used to guide the threads onto the right place on the spindle.

In the 17th century, England was famous for its woollen and worsted cloth. That industry was centred in the east and south in towns such as Norwich which jealously protected their product. Cotton processing was tiny: in 1701 only 1,985,868 pounds (900,775 kg) of cotton-wool was imported into England, and by 1730 this had fallen to 1,545,472 pounds (701,014 kg). This was due to commercial legislation to protect the woollen industry.Cheap calico prints, imported by the East India Company from ""Hindustan"", became popular. In 1700 an Act of Parliament was passed to prevent the importation of dyed or printed calicoes from India, China or Persia. This caused grey cloth (calico that hadn't been finished - dyed or printed) to be imported instead, and these were printed in southern England with popular patterns. Lancashire businessmen produced grey cloth with linen warp and cotton weft, which they sent to London to be finished.Cotton-wool imports recovered and by 1720 were almost back to 1701 levels. Again the woollen manufacturers, in true protectionist style, claimed this was taking jobs from workers in Coventry.Another law was passed, to fine anyone caught wearing printed or stained calico; muslins, neckcloths and fustians were exempted. It was this exemption that the Lancashire manufacturers exploited.

Before 1720, the handloom weaver spent part of each day visiting neighbours buying any weft they had. Carding and spinning could be the only income for that household, or part of it. The family might farm a few acres and card, spin and weave wool and cotton.It took three carders to provide the roving for one spinner, and up to three spinners to provide the yarn for one weaver. The process was continuous, and done by both sexes, from the youngest to the oldest. The weaver would go once a week to the market with his wares and offer them for sale.A change came about 1740 when fustian masters gave out raw cotton and warps to the weavers and return to collect the finished cloth. The weaver organised the carding, spinning and weaving to the master's specification.The master then dyed or printed the grey cloth, and took it to shopkeepers. Ten years later this had changed and the fustian masters were middle men, who collected the grey cloth and took it to market in Manchester where it was sold to merchants who organised the finishing.To handweave a 12 pounds (5.4 kg) piece of eighteenpenny weft took 14 days and paid 36 shillings in all. Of this nine shillings was paid for spinning, and nine for carding.So by 1750, a rudimentary manufacturing system feeding into a marketing system emerged.In 1738 John Kay started to improve the loom. He improved the reed, and invented the raceboard, the shuttleboxes and the picker which together allowed one weaver to double his output. This invention is commonly called the fly-shuttle. It met with violent opposition and he fled from Lancashire to Leeds.Though the workers thought this was a threat to their jobs, it was adopted and the pressure was on to speed up carding and spinning.The shortage of spinning capacity to feed the more efficient looms provided the motivation to develop more productive spinning techniques such as the spinning jenny, and triggered the start of the Industrial Revolution. 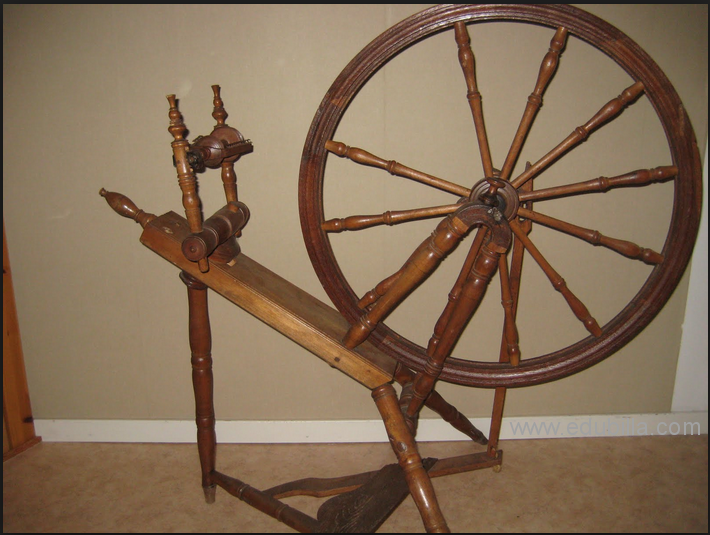 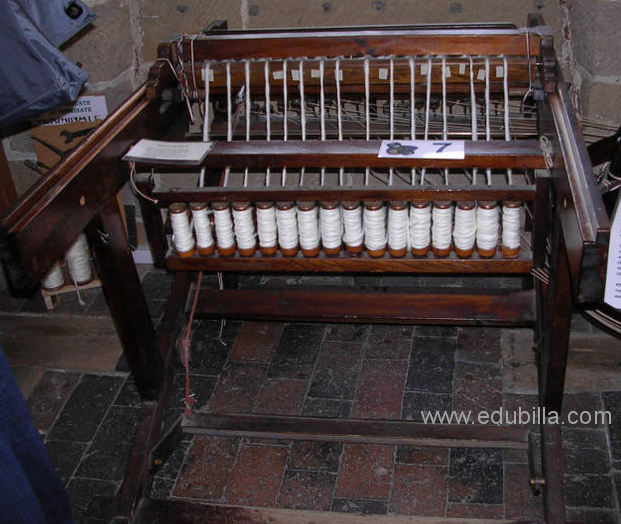