The spinning mule, is a machine used to spin cotton and other fibres in the mills of Lancashire and elsewhere. They were used extensively from the late 18th to the early 20th century. Mules were worked in pairs by a minder, with the help of two boys: the little piecer and the big or side piecer. The carriage carried up to 1,320 spindles and could be 150 feet (46 m) long, and would move forward and back a distance of 5 feet (1.5 m) four times a minute.It was invented between 1775 and 1779 by Samuel Crompton. The self-acting (automatic) mule was patented by Richard Roberts in 1825. At its peak there were 50,000,000 mule spindles in Lancashire alone. Modern versions are still in niche production and are used to spin woollen yarns from noble fibres such as cashmere, ultra-fine merino and alpaca for the knitware market.

Before the 1770s, textile production was a cottage industry using flax and wool. Weaving was a family activity. The children and women would card the fibre, which the women would spin into yarn; the male weaver would use a frame loom to weave this into cloth. This was then tentered in the sun to bleach it. The same production system was attempted with cotton, but the demand was too high, and with the invention by John Kay of the flying shuttle, which made the loom twice as productive, more cotton yarn was being woven than the traditional spinners could supply. There were two types of spinning wheel: the Simple Wheel, which uses an intermittent process, and the more refined Saxony wheel, which drives a differential spindle and flyer with a heck (an apparatus that guides the thread to the reels) in a continuous process. These two wheels became the starting point of technological development. Businessmen such as Richard Arkwright employed inventors to find solutions that would increase the amount of yarn spun, then took out the relevant patents. The spinning jenny allowed a group of eight spindles to be operated together. It mirrored the simple wheel; the rovings were clamped and a frame moved forward stretching and thinning the roving. A wheel was rapidly turned as the frame was pushed back, and the spindles rotated, twisted the rovings into yarn and collecting it on the spindles.

The throstle and the later water frame pulled the rovings through a set of attenuating rollers, spinning at differing speeds these pulled the thread continuously and it was twisted by the heck as it was wound on the heavy spindles. Eight or sixteen of these were mounted in parallel on a static frame driven usually by a water wheel. It was ideas from these two system that inspired the spinning mule. It was the water frame that inspired the ring frame.

The increased supply of muslin inspired developments in loom design such as Edmund Cartwright's power loom. Some spinners and handloom weavers opposed the perceived threat to their livelihood: there were frame-breaking riots and, in 1811–13, the Luddite riots. The preparatory and associated tasks allowed many children to be employed until this was regulated.

The hand-operated mule was a breakthrough in yarn production and the machines were copied by Samuel Slater, who founded the cotton industry in Rhode Island. Development over the next century and a half led to an automatic mule and to finer and stronger yarn. The ring frame, originating in New England in the 1820s, was little used in Lancashire until the 1890s. It required more energy and could not produce the finest counts.

Samuel Crompton invented the spinning mule or mule jenny in 1779, so called because it is a hybrid of Arkwright's water frame and James Hargreaves' spinning jenny in the same way that mule is the product of crossbreeding a female horse with a male donkey. The spinning mule has a fixed frame with a creel of bobbins to hold the roving, connected through the headstock to a parallel carriage with the spindles. On the outward motion, the rovings are paid out through attenuating rollers and twisted. On the return, the roving is clamped and the spindles reversed to take up the newly spun thread.

Crompton built his mule from wood. Although he used Hargreaves' ideas of spinning multiple threads and of attenuating the roving with rollers, it was he who put the spindles on the carriage and fixed a creel of roving bobbins on the frame. Both the rollers and the outward motion of the carriage remove irregularities from the rove before it is wound on the spindle. When Arkwright's patents expired, the mule was developed by several manufacturers.Crompton's first mule had 48 spindles and could produce 1 lb of 60s thread a day. This demanded a spindle speed of 1,700 rpm, and a power input of 1/16 hp.

The mule produced strong, thin yarn, suitable for any kind of textile. It was first used to spin cotton, then other fibres.

Samuel Crompton could not afford to patent his invention. He sold the rights to David Dale and returned to weaving. Dale patented the mule and profited from it. 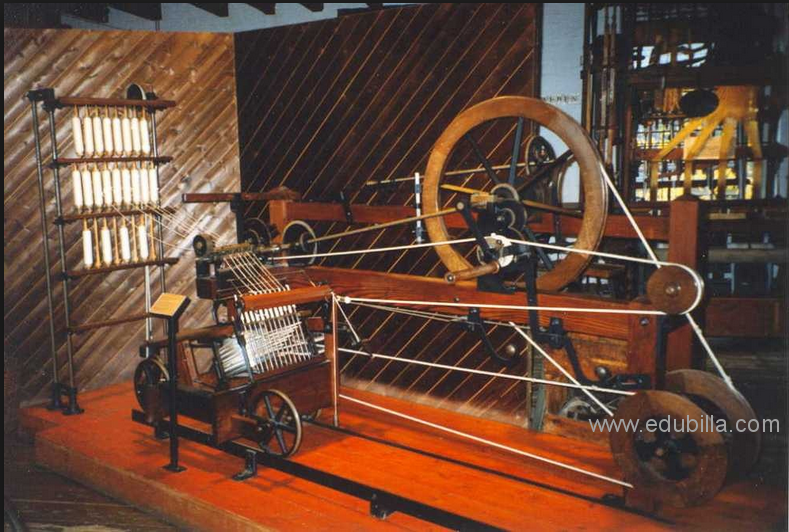 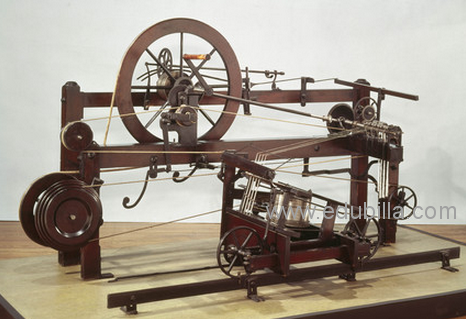