A cotton gin is a machine that quickly and easily separates cotton fibers from their seeds, allowing for much greater productivity than manual cotton separation.The fibers are processed into clothing or other cotton goods, and any undamaged seeds may be used to grow more cotton or to produce cottonseed oil and meal.

Although simple handheld roller gins have been used in India and other countries since at least 500 AD,the first modern mechanical cotton gin was created by American inventor Eli Whitney in 1793, and patented in 1794. It used a combination of a wire screen and small wire hooks to pull the cotton through, while brushes continuously removed the loose cotton lint to prevent jams. Whitney's gin revolutionised the cotton industry in the United States, but also led to the growth of slavery in the American South as the demand for cotton workers rapidly increased. The invention has thus been identified as an inadvertent contributing factor to the outbreak of the American Civil War.Modern automated cotton gins use multiple powered cleaning cylinders and saws, and offer far higher productivity than their hand-powered forebears.

Cotton fibers are produced in the seed pods (""bolls"") of the cotton plant; as a result, the fibers (""lint"") in the bolls are interspersed with the seeds. The seeds must be removed from the lint to make the fibers usable. Historically, this task was performed by hand: production of cotton required hundreds of man-hours to separate the seeds from a useful amount of lint. Many simple seed-removing devices have been invented over the years, but until the invention of the cotton gin most required significant operator attention and worked on a small scale.

The earliest versions of the cotton gin consisted of a single roller made of iron or wood and a flat piece of stone or wood. Evidence for this type of gin has been found in Africa, Asia, and North America. The first documentation of the cotton gin by contemporary scholars is found in the fifth century AD, in the form of Buddhist paintings depicting a single-roller gin in the Ajanta Caves in western India.These early gins were difficult to use and required a great deal of skill. A narrow single roller was necessary to expel the seeds from the cotton without crushing the seeds. The design was similar to that of a metate, which was used to grind grain. The early history of the cotton gin is ambiguous, because archeologists likely mistook the cotton gin's parts for other tools.

Between the 12th and 14th centuries, dual-roller gins appeared in India and China. The Indian version of the dual-roller gin was prevalent throughout the Mediterranean cotton trade by the 16th century. This mechanical device was, in some areas, driven by water power. 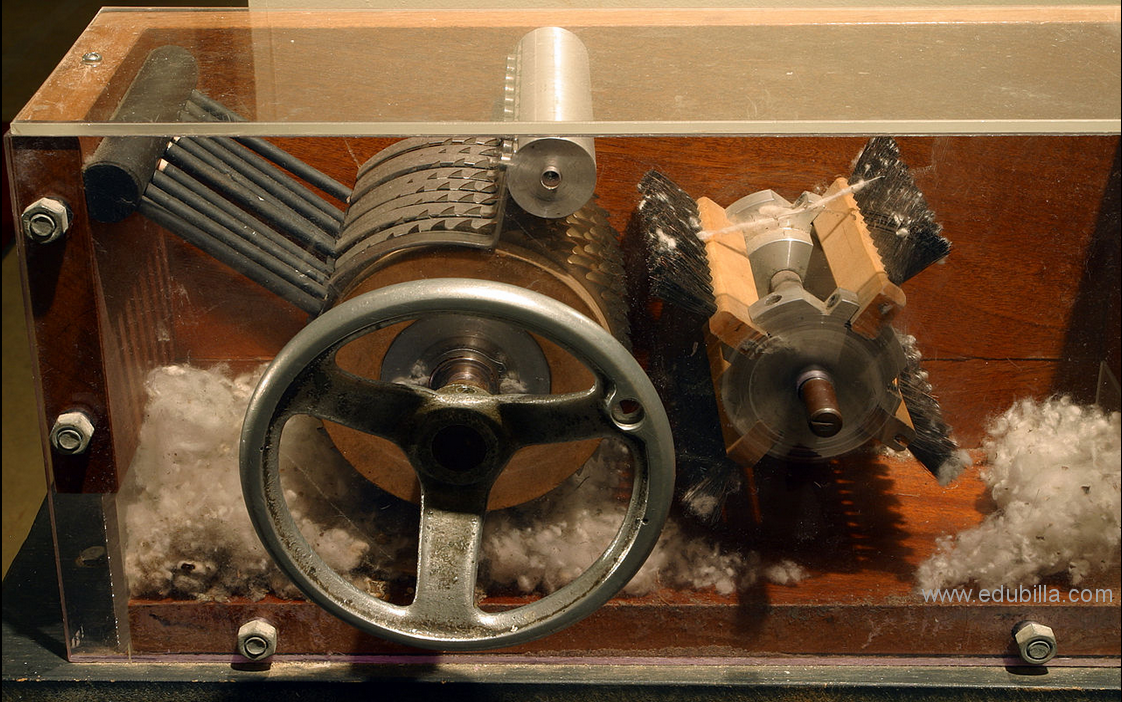 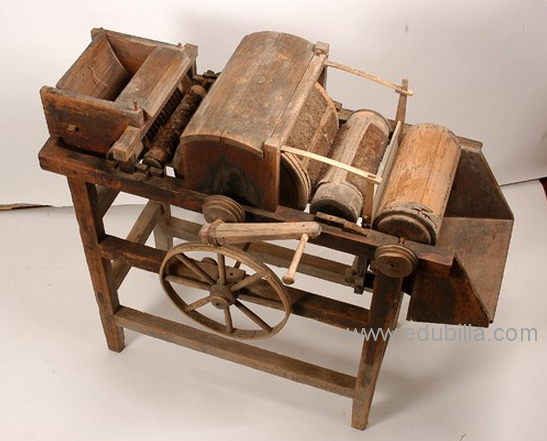