In cryptosystems for manually encrypting units of plaintext made up of more than a single letter, only digraphs (pairs of letters) were ever used. By treating digraphs in the plaintext as units rather than as single letters, the extent to which the raw frequency distribution survives the encryption process can be lessened but not eliminated, as letter pairs are themselves highly correlated. The best-known digraph substitution cipher is the Playfair, invented in 1854 by Sir Charles Wheatstone but championed at the British Foreign Office by Lyon Playfair, the first Baron Playfair of St. Andrews. Below is an example of a Playfair cipher, solved by Lord Peter Wimsey in Dorothy L. Sayers’s Have His Carcase (1932). Here, the mnemonic aid used to carry out the encryption is a 5 × 5-square matrix containing the letters of the alphabet (I and J are treated as the same letter).

Plaintext digraphs are encrypted with the matrix by first locating the two plaintext letters in the matrix. They are in different rows and columns; in the same row; in the same column; or alike. The corresponding encryption (replacement) rules are the following:

When the two letters are in different rows and columns, each is replaced by the letter that is in the same row but in the other column; i.e., to encrypt WE, W is replaced by U and E by G.

When A and R are in the same row, A is encrypted as R and R (reading the row cyclically) as M.

When I and S are in the same column, I is encrypted as S and S as X.

When a double letter occurs, a spurious symbol, say Q, is introduced so that the MM in SUMMER is encrypted as NL for MQ and CL for ME.

If the frequency distribution information were totally concealed in the encryption process, the ciphertext plot of letter frequencies in Playfair ciphers would be flat. It is not. The deviation from this ideal is a measure of the tendency of some letter pairs to occur more frequently than others and of the Playfair’s row-and-column correlation of symbols in the ciphertext—the essential structure exploited by a cryptanalyst in solving Playfair ciphers. The loss of a significant part of the plaintext frequency distribution, however, makes a Playfair cipher harder to cryptanalyze than a monoalphabetic cipher. 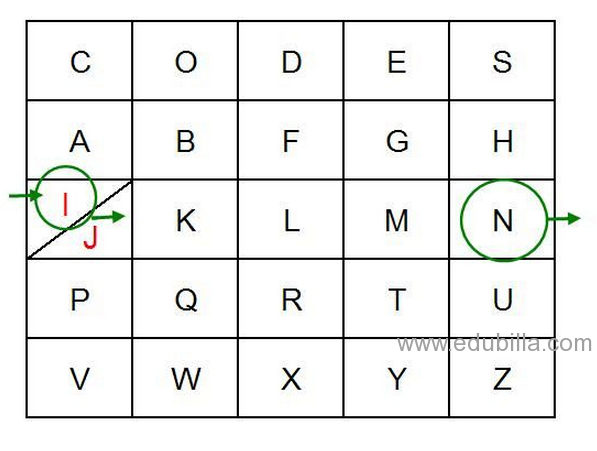