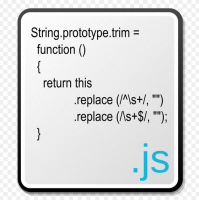 JavaScript is a dynamic programming language.It is most commonly used as part of web browsers, whose implementations allow client-side scripts to interact with the user, control the browser, communicate asynchronously, and alter the document content that is displayed.It is also used in server-side network programming with runtime environments such as Node.js, game development and the creation of desktop and mobile applications.

JavaScript is classified as a prototype-based scripting language with dynamic typing and first-class functions. This mix of features makes it a multi-paradigm language, supporting object-oriented,imperative, and functional programming styles.

Despite some naming, syntactic, and standard library similarities, JavaScript and Java are otherwise unrelated and have very different semantics. The syntax of JavaScript is actually derived from C, while the semantics and design are influenced by the Self and Scheme programming languages.

JavaScript is also used in environments that aren't web-based, such as PDF documents, site-specific browsers, and desktop widgets. Newer and faster JavaScript virtual machines (VMs) and platforms built upon them have also increased the popularity of JavaScript for server-side web applications. On the client side, JavaScript has been traditionally implemented as an interpreted language, but more recent browsers perform just-in-time compilation.

JavaScript has been standardized in the ECMAScript language specification.

JavaScript was created by Netscape programmer Brendan Eich. The web scripting language was first released under the name of LiveScript as part of Netscape Navigator 2.0 in September 1995.

In "Making Web Pages Come Alive" Brendan Eich said the following about how JavaScript came about:

I came to Netscape in April 1995, after seven years at Silicon Graphics and three years at MicroUnity Systems Engineering. Netscape was about a year old then and was looking for someone to work on a scripting language or some kind of language inside the browser that could be used to automate parts of a web page or make a web page more dynamic. Java had been around for five years at First Person and Sun, and had been retooled for the web in late 1994. Netscape was the first Java licensee, so the issue became: Can we do just Java, or do we need another language?

Brendan Eich was named Web Innovator of the Year by c/net's Builder.com in April 1998.