Dynamic Random Access Memory, DRAM is one of the most commonly found RAM modules in PC compatible personal computers and workstations. It stores its information in a cell containing a capacitor and transistor; because of this design, these cells must be refreshed with new electricity every few milliseconds for the memory to keep holding its data. DRAM was first invented and patented by Robert Dennard in 1968 and first released commercially by Intel in October 1970.

RAM is a volatile memory that is the data stored is lost automatically when the power is turned off.  The charged voltage is faded quickly and since capacitors are small they need to be refreshed very often. To overcome this problem DRAM’s are used. DRAM have already built-in logic chip which automatically refreshes the capacitor many times a second or else it forgets what it is holding.

Millions of capacitors and transistors are placed on single chip board. Capacitor is used to store bit data in 0 or 1. To store 1 in capacitor it is fully charged with electrons and while storing 0 it is fully emptied.

Transistor acts like a switch that allows the control circuitry on the memory chip read the capacitor or alters its state.

The cryptanalytic machine code-named "Aquarius" used at Bletchley Park during World War II incorporated a hard-wired dynamic memory. Paper tape was read and the characters on it "were remembered in a dynamic store. ... The store used a large bank of capacitors, which were either charged or not, a charged capacitor representing cross and an uncharged capacitor dot. Since the charge gradually leaked away, a periodic pulse was applied to top up those still charged (hence the term 'dynamic')".

In 1964, Arnold Farber and Eugene Schlig, working for IBM, created a hard-wired memory cell, using a transistor gate and tunnel diode latch. They replaced the latch with two transistors and two resistors, a configuration that became known as the Farber-Schlig cell. In 1965, Benjamin Agusta and his team at IBM created a 16-bit silicon memory chip based on the Farber-Schlig cell, with 80 transistors, 64 resistors, and four diodes. In 1966, DRAM was invented by Dr. Robert Dennard at the IBM Thomas J. Watson Research Center. He was granted U.S. patent number 3,387,286 in 1968. Capacitors had been used for earlier memory schemes such as the drum of the Atanasoff–Berry Computer, the Williams tube and the Selectron tube.

The Toshiba "Toscal" BC-1411 electronic calculator, which was introduced in November 1966,used a form of dynamic RAM built from discrete components.

In 1969 Honeywell asked Intel to make a DRAM using a 3-transistor cell that they had developed. This became the Intel 1102 (512x1) in early 1970. However, the 1102 had many problems, prompting Intel to begin work on their own improved design, in secrecy to avoid conflict with Honeywell. This became the first commercially available DRAM, the Intel 1103 (1024x1), in October 1970, despite initial problems with low yield until the fifth revision of the masks. The 1103 was designed by Joel Karp and laid out by Pat Earhart. The masks were cut by Barbara Maness and Judy Garcia.

The first DRAM with multiplexed row and column address lines was the Mostek MK4096 (4096x1) designed by Robert Proebsting and introduced in 1973. This addressing scheme uses the same address pins to receive the low half and the high half of the address of the memory cell being referenced, switching between the two halves on alternating bus cycles. This was a radical advance, effectively halving the number of address lines required, which enabled it to fit into packages with fewer pins, a cost advantage that grew with every jump in memory size. The MK4096 proved to be a very robust design for customer applications. At the 16K density, the cost advantage increased; the Mostek MK4116 16K DRAM, introduced in 1976, achieved greater than 75% worldwide DRAM market share. However, as density increased to 64K in the early 80s, Mostek was overtaken by Japanese DRAM manufacturers selling higher quality DRAMs using the same multiplexing scheme at below-cost prices. 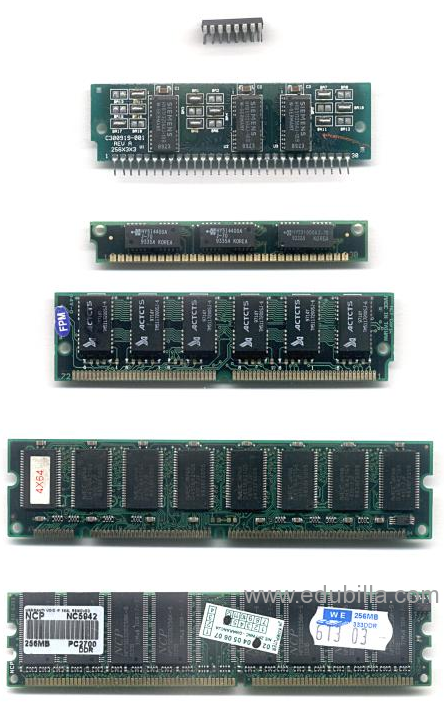