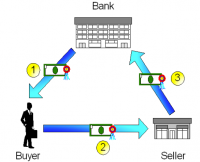 Using cryptography, ecash was conceived by David Chaum as an anonymous electronic money or electronic cash system in 1983. It was realized through his corporation Digicash and used as micropayment system at one US bank from 1995 to 1998.

Chaum started the company DigiCash in 1989 with "ecash" as its trademark. He raised $10 million from David Marquardt and by 1997 Nicholas Negroponte was its chairman.Yet, in the United States, only one bank -the Mark Twain bank in Saint Louis,MO- implemented ecash, testing it as micropayment system; Similar to credit cards, the system was free to purchasers, while merchants paid a transaction fee. After a three-year trial that signed up merely 5,000 customers, the system was dissolved in 1998, one year after the bank had been purchased by Mercantile Bank, a large issuer of credit cards.David Chaum opined then “As the Web grew, the average level of sophistication of users dropped. It was hard to explain the importance of privacy to them”.

DigiCash went bankrupt in 1998, despite flourishing electronic commerce, but with credit cards as the "currency of choice".

DigiCash was sold to eCash Technologies, including its eCash patents.

In 2002 eCash Technologies was acquired by InfoSpace,currently known as Blucora.