Far Manager is an orthodox file manager for Microsoft Windows and a clone of Norton Commander. Far Manager uses the Win32 console and has a keyboard-oriented user interface (although limited mouse operation, including drag-and-drop, is possible).

Originally, Far Manager was written by Eugene Roshal (the creator of WinRAR), but since 2000 the development is carried on by a team called the Far Group. The project's Unicode branches (2.0 and 3.0) are open-source (under the revised BSD license). All branches are available as 32- and 64-bit builds. Far Manager is often viewed as a very customizable file manager and text editor, and a free alternative to Total Commander.

Far Manager features an internal viewer and editor, customizable user menus, tree views, file search, compare, integrated help, and a task switcher for its tools. Its standard functionality can be expanded with macros (which allow scripting) and plugins.

Far Manager's default interface combines two file panels with a command prompt. Panels may be fully customized as to which columns are shown and in which order, and operations may be done to and from either panel. The file panels support wildcard selection, advanced filtering, sorting and highlighting. The file panels and the command prompt are both active at the same time (they are interacted with using different keys), and most features can be accessed using keyboard shortcuts (the key bar at the bottom displays the function key actions for the currently held down modifier keys). 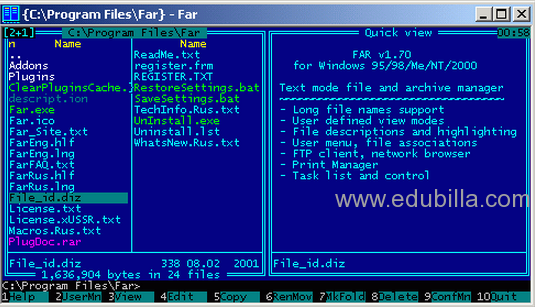 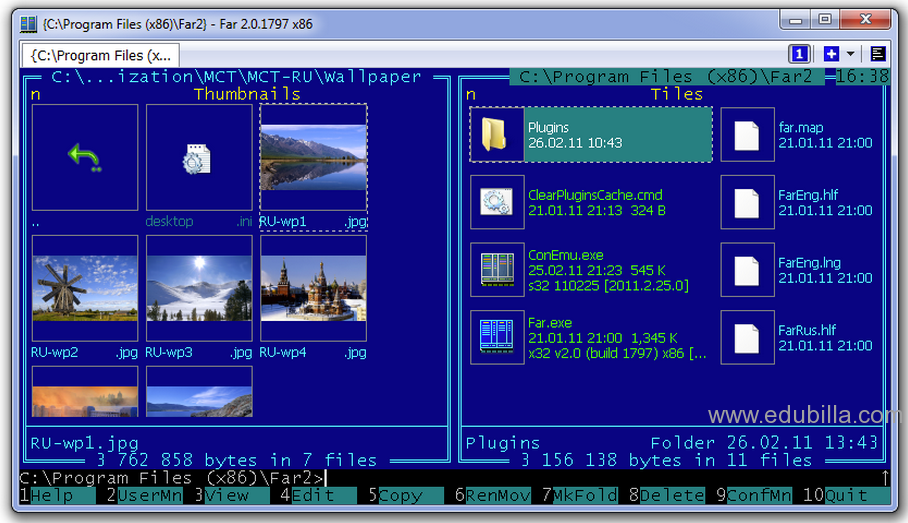