The 17th century marked the beginning of the history of mechanical calculators, as it saw the invention of its first machines, including Pascal's calculator, in 1642.Blaise Pascal had invented a machine which he presented as being able to perform computations that were previously thought to be only humanly possible,but he wasn't successful in creating an industry.The 17th century also saw the invention of some very powerful tools to aid arithmetic calculations like Napier's bones, logarithmic tables and the slide rule which, for their ease of use by scientists in multiplying and dividing, ruled over and impeded the use and development of mechanical calculators until the production release of the arithmometer in the mid 19th century.

Blaise Pascal invented a mechanical calculator with a sophisticated carry mechanism in 1642. After three years of effort and 50 prototypes he introduced his calculator to the public. He built twenty of these machines in the following ten years.This machine could add and subtract two numbers directly and multiply and divide by repetition. Since, unlike Schickard's machine, the Pascaline dials could only rotate in one direction zeroing it after each calculation required the operator to dial in all 9s and then (method of re-zeroing) propagate a carry right through the machine.This suggests that the carry mechanism would have proved itself in practice many times over. This is a testament to the quality of the Pascaline because none of the 17th and 18th century criticisms of the machine mentioned a problem with the carry mechanism and yet it was fully tested on all the machines, by their resets, all the time.

Pascal's invention of the calculating machine, just three hundred years ago, was made while he was a youth of nineteen. He was spurred to it by seeing the burden of arithmetical labor involved in his father's official work as supervisor of taxes at Rouen. He conceived the idea of doing the work mechanically, and developed a design appropriate for this purpose; showing herein the same combination of pure science and mechanical genius that characterized his whole life. But it was one thing to conceive and design the machine, and another to get it made and put into use.

In 1672, Gottfried Leibniz started working on adding direct multiplication to what he understood was the working of Pascal's calculator. However, it is doubtful that he had ever fully seen the mechanism and the method could not have worked because of the lack of reversible rotation in the mechanism. Accordingly he eventually designed an entirely new machine called the Stepped Reckoner ; it used his Leibniz wheels, was the first two-motion calculator, the first to use cursors (creating a memory of the first operand) and the first to have a movable carriage. Leibniz built two Stepped Reckoners, one in 1694 and one in 1706.Only the machine built in 1694 is known to exist, it was rediscovered at the end of the 19th century having spent 250 years forgotten in an attic in the University of Göttingen.

In 1893, the German calculating machine inventor Arthur Burkhardt was asked to put Leibniz machine in operating condition if possible. His report was favorable except for the sequence in the carry.

Leibniz had invented his namesake wheel and the principle of a two motion calculator, but after forty years of development he wasn't able to produce a machine that was fully operational; this makes Pascal's calculator the only working mechanical calculator in the 17th century. Leibniz was also the first person to describe a pinwheel calculator.He once said ""It is unworthy of excellent men to lose hours like slaves in the labour of calculation which could safely be relegated to anyone else if machines were used. 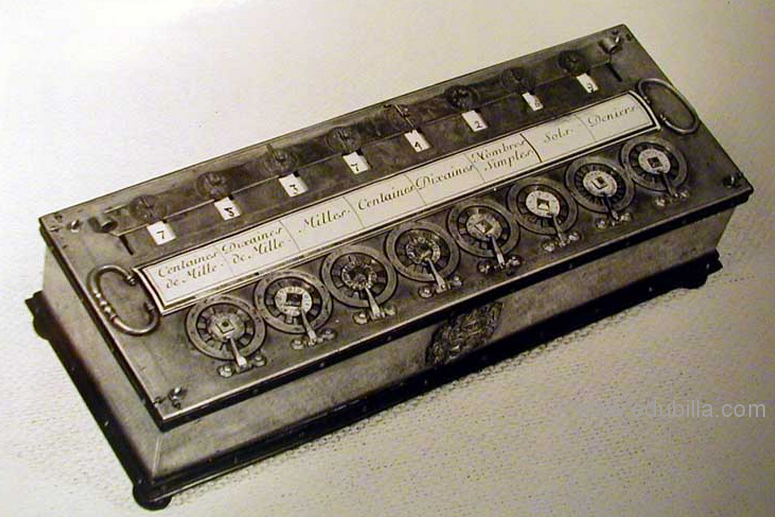