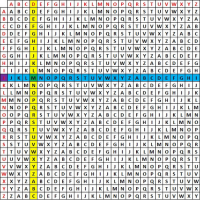 The Beaufort cipher, created by Sir Francis Beaufort, is a polyalphabetic substitution cipher that is similar to the Vigenere cipher, except that it enciphers characters in a slightly different manner.

To encrypt, first choose the plaintext character from the top row of the tableau, call this column P. Secondly, travel down column P to the corresponding key Letter K. Finally, move directly left from the Key letter to the left edge of the tableau, the CipherText encryption of Plaintext P with Key K will be there. For example if encrypting Plain text character "d" with Key "m" the steps would be:

find the column with "d" on the top,

travel down that column to find Key "m",

travel to the left edge of the tableau to find the CipherText letter ("J" in this case).

To decrypt, the process is reversed. The Beaufort cipher is a reciprocal cipher, that is, Decryption and Encryption algorithms are the same.

Decrypting as a Vigenere cipher 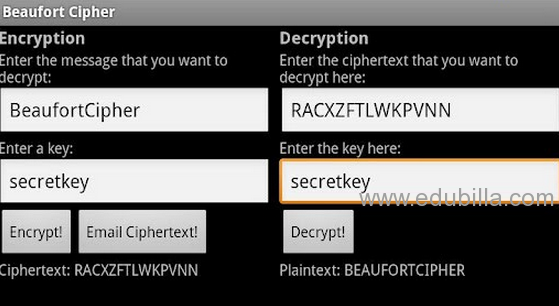