An ionic liquid (IL) is a salt in the liquid state. In some contexts, the term has been restricted to salts whose melting point is below some arbitrary temperature, such as 100 °C (212 °F). While ordinary liquids such as water and gasoline are predominantly made of electrically neutral molecules, ionic liquids are largely made of ions and short-lived ion pairs. These substances are variously called liquid electrolytes, ionic melts, ionic fluids, fused salts, liquid salts, or ionic glasses.

The discovery date of the "first" ionic liquid is disputed, along with the identity of its discoverer. Ethanolammonium nitrate (m.p. 52–55 °C) was reported in 1888 by S. Gabriel and J. Weiner.One of the earliest truly room temperature ionic liquids was ethylammonium nitrate(m.p. 12 °C), synthesized in 1914 by Paul Walden.In the 1970s and 1980s ionic liquids based on alkyl-substituted imidazolium and pyridinium cations, with halide or tetrahalogenoaluminate anions, were initially developed for use as electrolytes in battery applications.

An important property of the imidazolium halogenoaluminate salts is that their physical properties—such as viscosity, melting point, and acidity—could be adjusted by changing the alkyl substituents and the imidazolium/pyridinium and halide/halogenoaluminate ratios.Two major drawbacks for some applications were moisture sensitivity and acidity/basicity. In 1992, Wilkes and Zawarotko obtained ionic liquids with 'neutral' weakly coordinating anions such as hexafluorophosphate and tetrafluoroborate, allowing a much wider range of applications.

Recently a new class of air– and moisture–stable, neutral ionic liquids became available.Research has also been moving away from hexafluorophosphate and tetrafluoroborate towards less toxic alternatives such as bistriflimide or away from halogenated compounds completely. Moves towards less toxic cations have also been growing, with compounds like ammonium salts (such as choline) proving to be as flexible a scaffold as imidazolium. Long thought to be solely a product of laboratory synthesis, an ionic liquid has recently been found in nature.The material, formed by tawny crazy ants (Nylanderia fulva) when they groom after being attacked by fire ants (Solenopsis invicta), is a viscous oily protic ionic liquid that may be less capable of penetrating the carapace of the would-be ant victim than would be the original venom with which it was attacked. 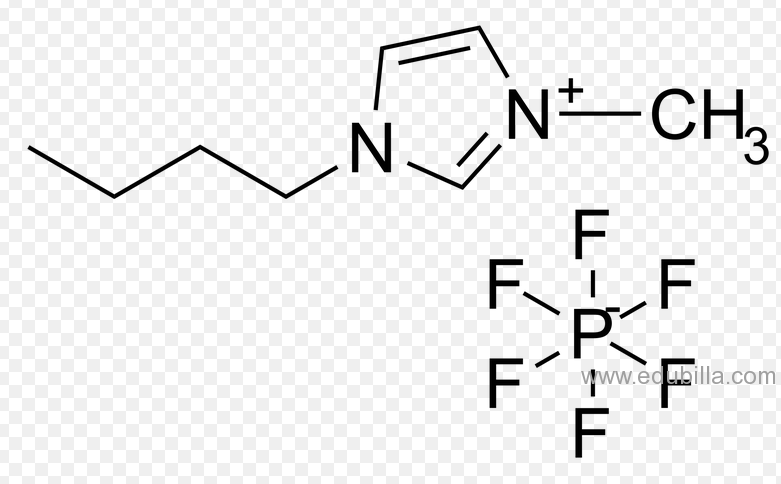