An Erlenmeyer flask or conical flask is a type of laboratory flask which features a flat bottom, a conical body, and a cylindrical neck. It is named after the German chemist Emil Erlenmeyer, who created it in 1860.

Erlenmeyer flasks have wide bases, with sides that taper upward to a short vertical neck. They may be graduated, and often spots of ground glass or enamel are used where they can be labeled with a pencil. It differs from the beaker in its tapered body and narrow neck.

The mouth of the Erlenmeyer flask can have a beaded lip that can be stoppered using a piece of cotton wool, rubber bung, or similar. Alternatively, the neck may be fitted with a female ground glass joint to accept a glass stopper.

The tapered sides and narrow neck of this flask allow the contents of the flask to be mixed by swirling, without risk of spillage, making them suitable for titrations. Such features similarly make the flask suitable for boiling liquids. Hot vapors condense on the upper section of the Erlenmeyer flask, reducing solvent loss. Erlenmeyer flasks' narrow necks can also support filter funnels.

The last two attributes of Erlenmeyer flasks make them especially appropriate for recrystallization. The sample to be purified is heated to a boil, and sufficient solvent is added for complete dissolution. The receiving flask is filled with a small amount of solvent, and heated to a boil. The hot solution is filtered through a fluted filter paper into the receiving flask. Hot vapors from the boiling solvent keep the filter funnel warm, avoiding the premature crystallization.

Erlenmeyer flasks are also used in microbiology for the preparation of microbial cultures. Plastic or glass Erlenmeyer flasks used in cell culture are sterilized and may feature vented closures to enhance gas exchange during incubation and shaking. The use of minimal liquid volumes, typically no more than one fifth of the total flask volume, and baffles molded into the flask's internal surface both serve to maximize gas transfer and promote chaotic mixing when the flasks are orbitally shaken.

To impede illicit drug manufacturers, the state of Texas has restricted the sale of Erlenmeyer flasks to those who have the requisite permits. 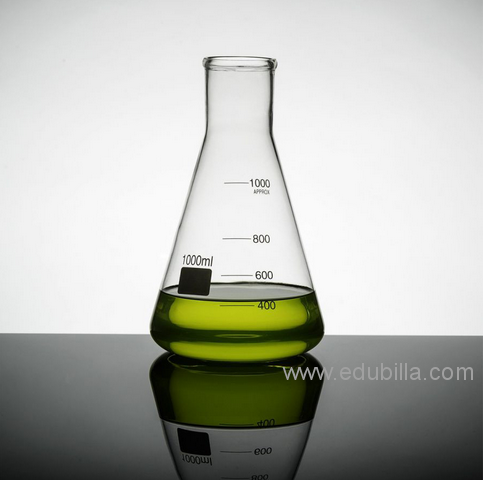 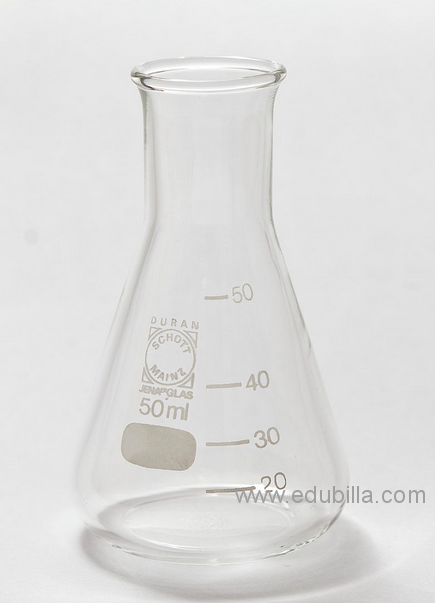