The Haber process, also called the Haber–Bosch process, is an artificial nitrogen fixation process and is the main industrial procedure for the production of ammonia today.It is named after its inventors, the German chemists Fritz Haber and Carl Bosch, who developed it in the first half of the twentieth century. The process converts atmospheric nitrogen (N2) to ammonia (NH3) by a reaction with hydrogen (H2) using a metal catalyst under high temperatures and pressures:

Throughout the nineteenth century the demand for nitrates and ammonia for use as fertilizers and industrial feedstocks had been steadily increasing, however the main source remained the mining of niter deposits. By the start of the twentieth century it was being predicted that these reserves would be unable to satisfy future demand and research into new potential sources of ammonia became ever-more important. The most obvious source was atmospheric nitrogen (N2), which makes up nearly 80% of the air, however N2 is exceptionally stable and will not readily react with other chemicals. Converting N2 into ammonia is therefore exceedingly difficult and posed a chemical challenge which occupied the efforts of chemists across the world.

Haber together with his assistant Robert Le Rossignol developed the high-pressure devices and catalysts used to demonstrate the Haber process at laboratory scale.They demonstrated their process in the summer of 1909 by producing ammonia from air drop by drop, at the rate of about 125 ml (4 US fl oz) per hour. The process was purchased by the German chemical company BASF, which assigned Carl Bosch the task of scaling up Haber's tabletop machine to industrial-level production.He succeeded in this process in 1910. Haber and Bosch were later awarded Nobel prizes, in 1918 and 1931 respectively, for their work in overcoming the chemical and engineering problems posed by the use of large-scale, continuous-flow, high-pressure technology.

Ammonia was first manufactured using the Haber process on an industrial scale in 1913 in BASF's Oppau plant in Germany, production reaching 20 tonnes/day the following year.During World War I, the synthetic ammonia was used for the production of nitric acid, a precursor to munitions. The Allies had access to large amounts of sodium nitrate deposits in Chile (so called "Chile saltpetre") that belonged almost totally to British industries. As Germany lacked access to such readily available natural resources, the Haber process proved essential to the continued German war effort. 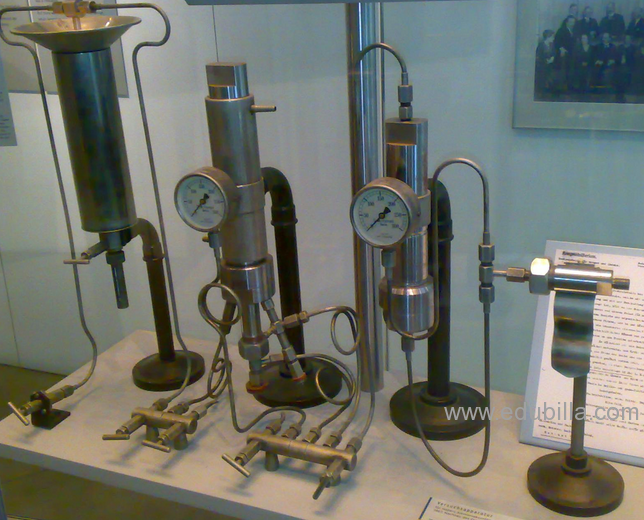