WD-40 is the trademark name of a penetrating oil and water-displacing spray.

WD-40 Was developed in 1953 by Dr. Norm Larsen,founder of the Rocket Chemical Company, in San Diego, California. WD-40, abbreviated from the phrase "Water Displacement, 40th formula,"was originally designed to repel water and prevent corrosion,and later was found to have numerous household uses.

Larsen was attempting to create a formula to prevent corrosion in nuclear missiles, by displacing the standing water that causes it. He claims he arrived at a successful formula on his 40th attempt.WD-40 is primarily composed of various hydrocarbons.

WD-40 was first used by Convair to protect the outer skin and, more importantly, the paper-thin balloon tanks of the Atlas missile from rust and corrosion.These stainless steel fuel tanks were so thin that, when empty, they had to be kept inflated with nitrogen gas to prevent their collapse.

The long-term active ingredient is a non-volatile, viscous oil which remains on the surface, providing lubrication and protection from moisture.This is diluted with a volatile hydrocarbon to give a low viscosity fluid which can be sprayed and thus penetrate crevices. The volatile hydrocarbon then evaporates, leaving the oil behind. A propellant (originally a low-molecular weight hydrocarbon, now carbon dioxide) provides gas pressure in the can to force the liquid through the spray nozzle, then evaporates away.

These properties make the product useful in both home and commercial fields; removing dirt and residue, and extricating stuck screws and bolts are common usages, and it also loosens stubborn zippers. It is also useful in displacing moisture.

Due to its lightness (i.e., low viscosity), WD-40 is not always the preferred oil for certain applications. Applications that require higher viscosity oils may use motor oils, while those requiring a mid-range oil could use honing oil. 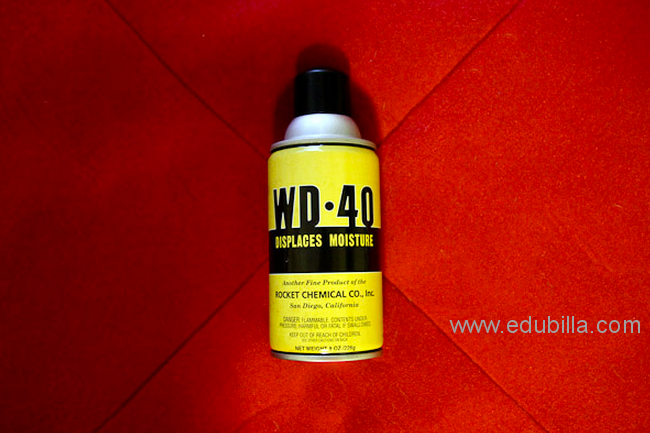 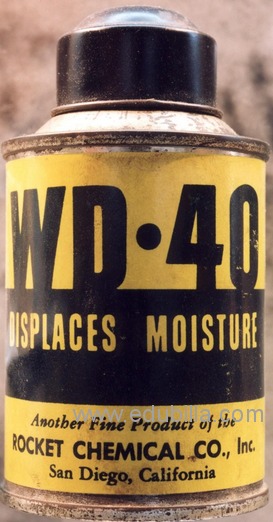