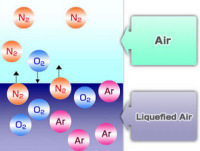 Liquid air is air that has been cooled to very low temperatures (cryogenic temperatures), so that it has condensed into a pale blue mobile liquid. To protect it from room temperature, it must be kept in a vacuum insulated flask. Liquid air can absorb heat rapidly and revert to its gaseous state. It is often used for condensing other substances into liquid and/or solidifying them, and as an industrial source of nitrogen, oxygen, argon, and other inert gases through a process called air separation. Liquid air is also replacing liquid nitrogen for theatrical smoke and fog effects.

Liquid air has a density of approximately 870 kg/m3 (0.87 g/cm3), though the density may vary depending on the elemental composition of the air. Since dry gaseous air contains approximately 78% nitrogen, 21% oxygen, and 1% argon, the density of liquid air at standard composition is calculated by the percentage of the components and their respective liquid densities. Although air contains trace amounts of carbon dioxide (about 0.040%), this gas sublimates (transfers directly between gas and solid, and therefore does not exist as a liquid) at pressures less than 5.1 atmospheres.

The boiling point of liquid air is the same as the lowest of its constituent gases, which is nitrogen; thus air remains liquid below 77 K (-195.79 °C)(-320 F), at standard atmospheric pressure. It can be hard to keep at a stable composition as temperature rises, since the nitrogen will boil off first, leaving the mixture oxygen-rich. This may also occur in some circumstances due to the liquid air condensing oxygen out of the atmosphere.Liquid air freezes at approximately 58 K (-215 °C)(-355 F), also at standard atmospheric pressure.

The constituents of air were once known as "permanent gases", as they could not be liquified solely by compression at room temperature. A compression process will raise the temperature of the gas. This heat is removed by cooling to the ambient temperature in a heat exchanger, and then expanding by venting into a chamber. The expansion causes a lowering of the temperature, and by counter-flow heat exchange of the expanded air, the pressurized air entering the expander is further cooled. With sufficient compression, flow, and heat removal, eventually droplets of liquid air will form, which may then be employed directly for low temperature demonstrations.

The main constituents of air were liquefied for the first time by Polish scientists Zygmunt Florenty Wróblewski and Karol Olszewski in 1883.Devices for the production of liquid air are simple enough to be fabricated by the experimenter using commonly available materials.

The most common process for the preparation of liquid air is the two-column Hampson-Linde cycle using the Joule-Thomson effect. Air is fed at high pressure (>60 psig, or 520 kPa) into the lower column, in which it is separated into pure nitrogen and oxygen-rich liquid. The rich liquid and some of the nitrogen are fed as reflux into the upper column, which operates at low pressure (<10 psig, or 170 kPa), where the final separation into pure nitrogen and oxygen occurs. A raw argon product can be removed from the middle of the upper column for further purification. 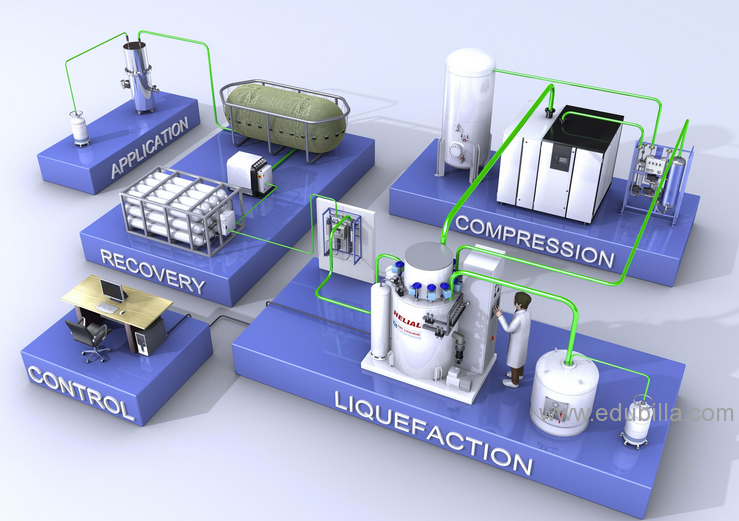