A fuel cell is a device that converts the chemical energy from a fuel into electricity through a chemical reaction with oxygen or another oxidizing agent.

Hydrogen produced from the steam methane reforming of natural gas is the most common fuel, but for greater efficiency hydrocarbons can be used directly such as natural gas and alcohols like methanol. Fuel cells are different from batteries in that they require a continuous source of fuel and oxygen/air to sustain the chemical reaction whereas in a battery the chemicals present in the battery react with each other to generate an electromotive force (emf). Fuel cells can produce electricity continuously for as long as these inputs are supplied.

The first fuel cells were invented in 1838. The first commercial use of fuel cells came more than a century later in NASA space programs to generate power for probes, satellites and space capsules. Since then, fuel cells have been used in many other applications. Fuel cells are used for primary and backup power for commercial, industrial and residential buildings and in remote or inaccessible areas. They are also used to power fuel-cell vehicles, including forklifts, automobiles, buses, boats, motorcycles and submarines.

There are many types of fuel cells, but they all consist of an anode, a cathode and an electrolyte that allows charges to move between the two sides of the fuel cell. Electrons are drawn from the anode to the cathode through an external circuit, producing direct current electricity. As the main difference among fuel cell types is the electrolyte, fuel cells are classified by the type of electrolyte they use followed by the difference in startup time ranging from 1 second for proton exchange membrane fuel cells (PEM fuel cells, or PEMFC) to 10 minutes for solid oxide fuel cells (SOFC). Fuel cells come in a variety of sizes. Individual fuel cells produce relatively small electrical potentials, about 0.7 volts, so cells are "stacked", or placed in series, to increase the voltage and meet an application's requirements.In addition to electricity, fuel cells produce water, heat and, depending on the fuel source, very small amounts of nitrogen dioxide and other emissions. The energy efficiency of a fuel cell is generally between 40–60%, or up to 85% efficient in cogeneration if waste heat is captured for use.

The first references to hydrogen fuel cells appeared in 1838. In a letter dated October 1838 but published in the December 1838 edition of The London and Edinburgh Philosophical Magazine and Journal of Science, Welsh physicist and barrister William Grove wrote about the development of his first crude fuel cells. He used a combination of sheet iron, copper and porcelain plates, and a solution of sulphate of copper and dilute acid.In a letter to the same publication written in December 1838 but published in June 1839, German physicist Christian Friedrich Schönbein discussed the first crude fuel cell that he had invented. His letter discussed current generated from hydrogen and oxygen dissolved in water. Grove later sketched his design, in 1842, in the same journal. The fuel cell he made used similar materials to today's phosphoric-acid fuel cell.

In 1939, British engineer Francis Thomas Bacon successfully developed a 5 kW stationary fuel cell. In 1955, W. Thomas Grubb, a chemist working for the General Electric Company (GE), further modified the original fuel cell design by using a sulphonated polystyrene ion-exchange membrane as the electrolyte. Three years later another GE chemist, Leonard Niedrach, devised a way of depositing platinum onto the membrane, which served as catalyst for the necessary hydrogen oxidation and oxygen reduction reactions. This became known as the "Grubb-Niedrach fuel cell".GE went on to develop this technology with NASA and McDonnell Aircraft, leading to its use during Project Gemini. This was the first commercial use of a fuel cell. In 1959, a team led by Harry Ihrig built a 15 kW fuel cell tractor for Allis-Chalmers, which was demonstrated across the U.S. at state fairs. This system used potassium hydroxide as the electrolyte and compressed hydrogen and oxygen as the reactants. Later in 1959, Bacon and his colleagues demonstrated a practical five-kilowatt unit capable of powering a welding machine. In the 1960s, Pratt and Whitney licensed Bacon's U.S. patents for use in the U.S. space program to supply electricity and drinking water (hydrogen and oxygen being readily available from the spacecraft tanks). In 1991, the first hydrogen fuel cell automobile was developed by Roger Billings.

UTC Power was the first company to manufacture and commercialize a large, stationary fuel cell system for use as a co-generation power plant in hospitals, universities and large office buildings. 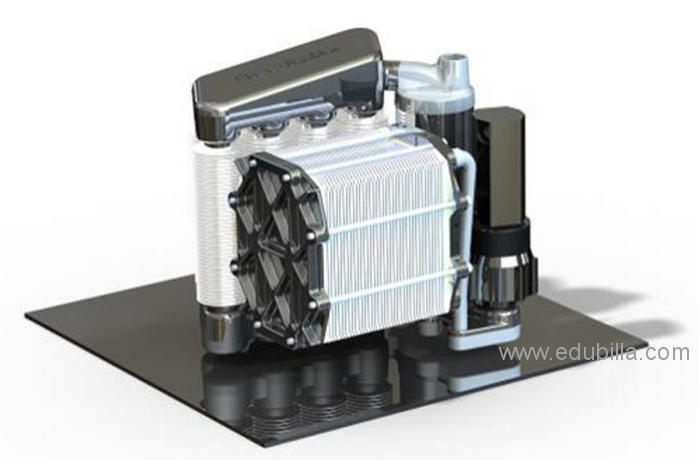 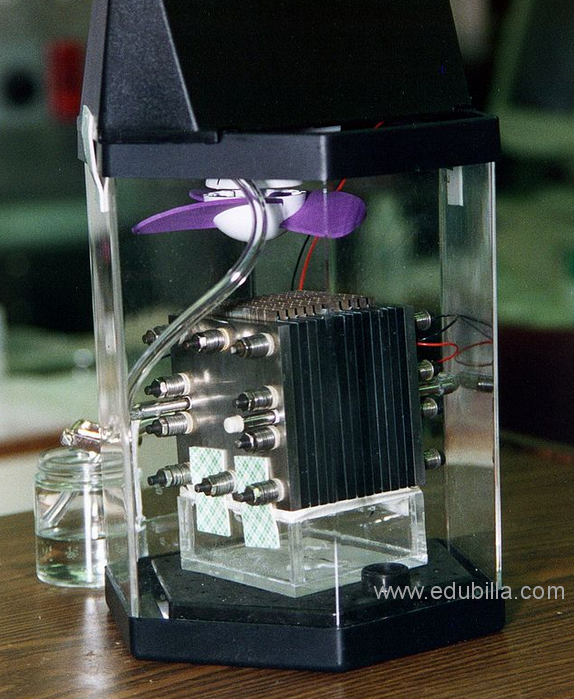