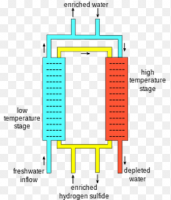 The Girdler sulfide process is an industrial production method for filtering out of natural water the heavy water, which is used in particle research, in Deuterium NMR spectroscopy, deuteriated solvents for proton NMR spectroscopy, in nuclear reactors (as a coolant and moderator) in which case they are termed 'heavy water reactors' and in deuterated drugs. Karl-Hermann Geib and Jerome S. Spevack independently invented the process in the early 1940s. The name derives from the Girdler company, which built the first American plant using the process.

The method is an isotopic exchange process between H2S and H2O ("light" water), that produces heavy water over several steps. It is a highly energy intensive process.Seawater contains 180 parts per million of D2O.

Until its closure in 1997, the Bruce Heavy Water Plant in Ontario (close to the Bruce Nuclear Generating Station) was the world's largest heavy water production plant, with a capacity of 700 tonnes per year. It used the Girdler sulfide process to produce heavy water, and required 340,000 tonnes of feed water to produce one tonne of heavy water.

The first such facility of India's Heavy Water Board to use the Girdler process is at Rawatbhata near Kota, Rajasthan, other plants exist in the USA and Romania for example.

Hydrogen sulfide gas is circulated in a closed loop between the cold tower and the hot tower (although these can be separate towers, they can also be separate sections of one tower, with the cold section at the top). Demineralised and deaerated water is fed to the cold tower where deuterium migration preferentially takes place from the hydrogen sulfide gas to the liquid water. Normal water is fed to the hot tower where deuterium transfer takes place from the liquid water to the hydrogen sulfide gas. An appropriate "cascade" setup accomplishes enrichment: "enriched" water is fed into the cold tower and is further "enriched". Using one tower instead of a cascade is possible, but in practice it never occurs, as the tower size and process inventory would be much larger.

Normally in this process, water is enriched to 15–20% D2O. Further enrichment to "reactor-grade" heavy water (> 99% D2O) is done in another process, i.e. distillation or electrolysis.