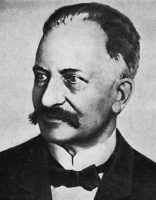 Paul Walden (1863 – 1957) was a Russian and Latvian-German chemist known for his work in stereochemistry and history of chemistry. In particular he invented the stereochemical reaction known as Walden inversion and synthesized the first room-temperature ionic liquid, ethylammonium nitrate.

In 1888, Walden graduated from the University with a degree in chemical engineering and continued working at the Chemistry Department as an assistant to professor C. Bischof. Under his guidance, Walden began compiling "Handbook of Stereochemistry" which was published in 1894. In preparation of this handbook, Walden had to perform numerous chemical syntheses and characterizations which resulted in 57 journal papers on stereochemistry alone, published between 1889 and 1900 in Russian and foreign journals 57 articles on the stereochemistry. He also continued his research in the field of physical chemistry, establishing in 1889 that the ionizing power of non-aqueous solvent is directly proportional to the dielectric constant. During the summer vacations of 1890 and 1891, Walden was visiting Ostwald at the University of Leipzig and in September 1891 defended there a master thesis on the affinity values of certain organic acids. Ostwald suggested him to stay in Leipzig as a private lecturer, but Walden declined, hoping for a better career in Riga.

In the summer of 1892 he was appointed assistant professor of physical chemistry. A year later he defended his doctorate on osmotic phenomena in sedimentary layers and in September 1894 became professor of analytical and physical chemistry at the Riga Technical University. He worked there until 1911 and during 1902–1905 was rector of the University. In 1895, Walden made his most remarkable discovery which was later named Walden inversion, namely that various stereoisomers can be obtained from the same compound via certain exchange reactions involving hydrogen.This topic became the basis for his habilitation thesis defended in March 1899 at St. Petersburg University.

After that, Walden became interested in electrochemistry of nonaqueous solutions. In 1902, he proposed a theory of autodissociation of inorganic and organic solvents. In 1905, he found a relationship between the maximum molecular conductivity and viscosity of the medium and in 1906, coined the term "solvation". Together with his work on stereochemistry, these results brought him to prominence; in particular, he was considered a candidate for the Nobel Prize in Chemistry in 1913 and 1914.

Walden was also credited as a talented chemistry lecturer. In his memoirs, he wrote: "My audience usually was crowded and the feedback of sympathetic listeners gave me strength ... my lectures I was giving spontaneously, to bring freshness to the subject ... I never considered teaching as a burden".