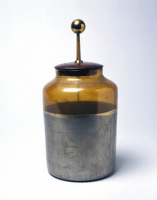 A Leyden jar, or Leiden jar, is a device that ""stores"" static electricity between two electrodes on the inside and outside of a glass jar. It was the original form of a capacitor (originally known as a ""condenser"").

It was invented independently by German cleric Ewald Georg von Kleist on 11 October 1745 and by Dutch scientist Pieter van Musschenbroek of Leiden (Leyden) in 1745–1746.The invention was named for the city.

The Leyden jar was used to conduct many early experiments in electricity, and its discovery was of fundamental importance in the study of electricity. Previously, researchers had to resort to insulated conductors of large dimensions to store a charge. The Leyden jar provided a much more compact alternative.

A famous use of the Leyden jar was Benjamin Franklin's kite experiment, which gave rise to the phrase ""capture lightning in a bottle"".

The Ancient Greeks already knew that pieces of amber could attract lightweight particles after being rubbed. The amber becomes electrified by triboelectric effect, mechanical separation of charge in a dielectric. The Greek word for amber is ""elektron"" and is the origin of the word ""electricity"".

Around 1650, Otto von Guericke built a crude electrostatic generator: a sulphur ball that rotated on a shaft. When Guericke held his hand against the ball and turned the shaft quickly, a static electric charge built up. This experiment inspired the development of several forms of ""friction machines"", that greatly helped in the study of electricity.

The Leyden jar was discovered independently by two parties: German scientist and jurist Ewald Georg von Kleist, and Dutch scientists Pieter van Musschenbroek and Andreas Cunaeus.These scientists developed the Leyden jar while working under a theory of electricity that saw electricity as a fluid, and hoped to develop the jar to ""capture"" this fluid.In 1744 von Kleist lined a glass jar with silver foil, and charged the foil with a friction machine. Kleist was convinced that a substantial electric charge could be collected when he received a significant shock from the device. The ""Kleistian jar"" was independently discovered around the same time by Pieter van Musschenbroek and his assistant Cunaeus at the University of Leiden, who tried to charge a jar of water with electricity. Curaeus also received a severe shock. Van Musschenbroek communicated the experiment to the French scientific community, and the jar came to be called the Leyden jar.

Daniel Gralath was the first to connect several jars in parallel to increase the total possible stored charge.The term ""battery"" was coined by Benjamin Franklin for these combinations, who likened it to a battery of cannon (cannons grouped in a common place).The term was later used for combinations of multiple electrochemical cells, the modern meaning of the term ""battery"". By the middle of the 19th century, the Leyden jar had become common enough for writers to assume their readers knew of and understood its basic operation.

Around the turn of the century it began to be widely used in spark-gap transmitters and medical electrotherapy equipment. By the early 20th century, improved dielectrics and the need to reduce their size and undesired inductance and resistance for use in the new technology of radio caused the Leyden jar to evolve into the modern compact form of capacitor. 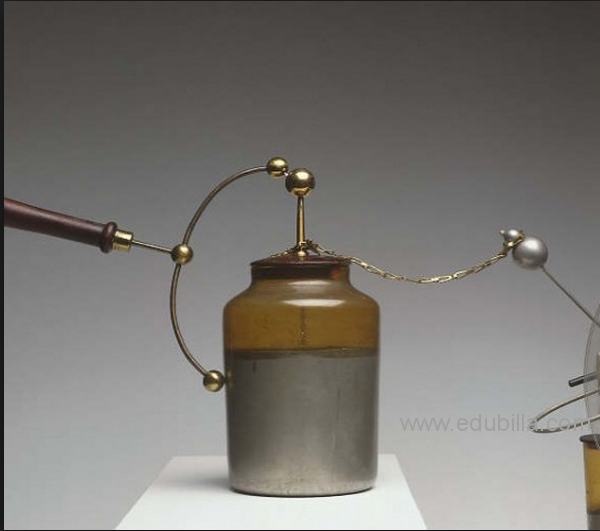 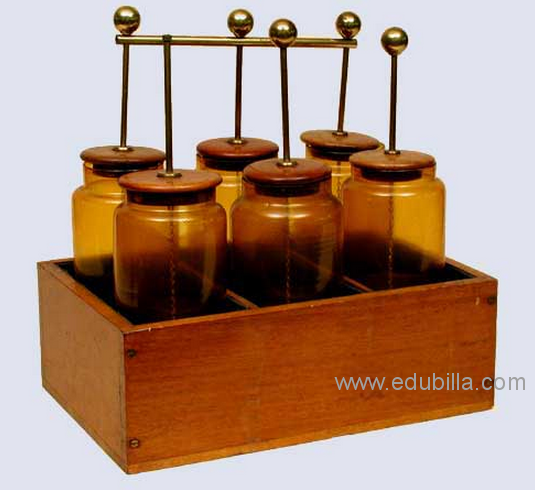