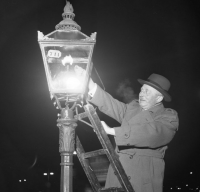 Gas lighting is production of artificial light from combustion of a gaseous fuel, such as hydrogen, methane, carbon monoxide, propane, butane, acetylene, ethylene, or natural gas. Before electricity became sufficiently widespread and economical to allow for general public use, gas was the most popular means of outdoor and indoor lighting in cities and suburbs. Early gas lights had to be lit manually, but many later designs are self-igniting.

Gas lighting today is typically used for camping, where the high energy density of a hydrocarbon fuel, combined with the modular nature of canisters (a strong metal container) allows bright and long lasting light to be produced cheaply and without complex equipment. In addition, some urban historical districts retain gas street lighting, and gas lighting is used indoors or outdoors to create or preserve a nostalgic effect.

William Murdoch (sometimes spelled ""Murdock"") was the first to exploit the flammability of gas for the practical application of lighting. He worked for Matthew Boulton and James Watt at their Soho Foundry steam engine works in Birmingham, England. In the early 1790s, while overseeing the use of his company's steam engines in tin mining in Cornwall, Murdoch began experimenting with various types of gas, finally settling on coal-gas as the most effective. He first lit his own house in Redruth, Cornwall in 1792.In 1798, he used gas to light the main building of the Soho Foundry and in 1802 lit the outside in a public display of gas lighting, the lights astonishing the local population. One of the employees at the Soho Foundry, Samuel Clegg, saw the potential of this new form of lighting. Clegg left his job to set up his own gas lighting business, the Gas Lighting and Coke Company.

A ""thermolampe"" using gas distilled from wood was patented in 1799, whilst German inventor Friedrich Winzer (Frederick Albert Winsor) was the first person to patent coal-gas lighting in 1804.

In 1801, Phillipe Lebon of Paris had also used gas lights to illuminate his house and gardens, and was considering how to light all of Paris. In 1820, Paris adopted gas street lighting.

In 1804, Dr. Henry delivered a course of lectures on chemistry, at Manchester, in which he showed the mode of producing gas from coal, and the facility and advantage of its use. Dr. Henry analyzed the composition and investigated the properties of carburetted hydrogen gas. His experiments were numerous and accurate and made upon a variety of substances; having obtained the gas from wood, peat, different kinds of coal, oil, wax, &c. he quantified the intensity of the light from each source.

Josiah Pemberton, an inventor, had for some time been experimenting on the nature of gas. A resident of Birmingham, his attention may have been roused by the exhibition at Soho. About 1806, he exhibited gas-lights in a variety of forms and with great brilliance at the front of his manufactory in Birmingham. In 1808 he constructed an apparatus, applicable to several uses, for Benjamin Cooke, a manufacturer of brass tubes, gilt toys, and other articles.

In 1808, Murdoch presented to the Royal Society a paper entitled ""Account of the Application of Gas from Coal to Economical Purposes"" wherein he described his successful application of coal-gas to lighting the extensive establishment of Messrs. Phillips and Lea. For this paper he was awarded Count Rumford's gold medal.Murdoch's statements threw great light on the comparative advantage of gas and candles and contained much useful information on the expenses of production and management.

The first public street lighting with gas was demonstrated in Pall Mall, London, on January 28, 1807, by Frederick Albert Winsor.In 1812, Parliament granted a charter to the London and Westminster Gas Light and Coke Company, and the first gas company in the world came into being. Less than two years later, on December 31, 1813, the Westminster Bridge was lit by gas.

As artificial lighting became more common, desire grew for it to become readily available to the public. This was in part because towns became much safer places to travel around after gas lamps were installed in the streets, reducing crime rates.In 1809, accordingly, the first application was made to Parliament to incorporate a company in order to accelerate the process, but failed to pass. In 1810, however, the application was renewed by the same parties, and though some opposition was encountered and considerable expense incurred, the bill passed, but not without great alterations; and the London and Westminster Chartered Gas-Light and Coke Company was established. By 1816, Samuel Clegg obtained the patent for his horizontal rotative retort, his apparatus for purifying coal-gas with cream of lime, and for his rotative gas meter and self-acting governor. 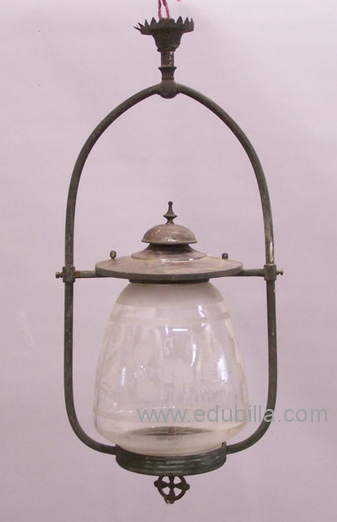 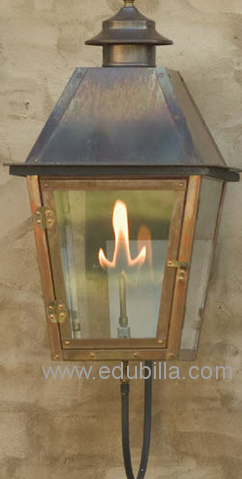