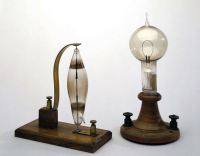 An incandescent light bulb, incandescent lamp or incandescent light globe is an electric light which produces light with a wire filament heated to a high temperature by an electric current passing through it, until it glows.The hot filament is protected from oxidation with a glass or quartz bulb that is filled with inert gas or evacuated. In a halogen lamp, filament evaporation is prevented by a chemical process that redeposits metal vapor onto the filament, extending its life. The light bulb is supplied with electrical current by feed-through terminals or wires embedded in the glass. Most bulbs are used in a socket which provides mechanical support and electrical connections.

Incandescent bulbs are manufactured in a wide range of sizes, light output, and voltage ratings, from 1.5 volts to about 300 volts. They require no external regulating equipment, have low manufacturing costs, and work equally well on either alternating current or direct current. As a result, the incandescent lamp is widely used in household and commercial lighting, for portable lighting such as table lamps, car headlamps, and flashlights, and for decorative and advertising lighting.

Incandescent bulbs are gradually being replaced in many applications by other types of electric light, such as fluorescent lamps, compact fluorescent lamps (CFL), cold cathode fluorescent lamps (CCFL), high-intensity discharge lamps, and light-emitting diode lamps (LED). Some jurisdictions, such as the European Union, China, Canada and United States, are in the process of phasing out the use of incandescent light bulbs while others, including Colombia,[4] Mexico, Cuba, Argentina, Brazil or Australia,have prohibited them already.

In addressing the question of who invented the incandescent lamp, historians Robert Friedel and Paul Israel list 22 inventors of incandescent lamps prior to Joseph Swan and Thomas Edison. They conclude that Edison's version was able to outstrip the others because of a combination of three factors: an effective incandescent material, a higher vacuum than others were able to achieve (by use of the Sprengel pump) and a high resistance that made power distribution from a centralized source economically viable.

Historian Thomas Hughes has attributed Edison's success to his development of an entire, integrated system of electric lighting.

The lamp was a small component in his system of electric lighting, and no more critical to its effective functioning than the Edison Jumbo generator, the Edison main and feeder, and the parallel-distribution system. Other inventors with generators and incandescent lamps, and with comparable ingenuity and excellence, have long been forgotten because their creators did not preside over their introduction in a system of lighting.

In 1802, Humphry Davy had what was then the most powerful electrical battery in the world at the Royal Institution of Great Britain (with the possible exception of another one made in the same year by Vasily Petrov in Russia). In that year, Davy created the first incandescent light by passing the current through a thin strip of platinum, chosen because the metal had an extremely high melting point. It was not bright enough nor did it last long enough to be practical, but it was the precedent behind the efforts of scores of experimenters over the next 75 years.

Over the first three-quarters of the 19th century many experimenters worked with various combinations of platinum or iridium wires, carbon rods, and evacuated or semi-evacuated enclosures. Many of these devices were demonstrated and some were patented.

In 1835, James Bowman Lindsay demonstrated a constant electric light at a public meeting in Dundee, Scotland. He stated that he could "read a book at a distance of one and a half feet". However, having perfected the device to his own satisfaction, he turned to the problem of wireless telegraphy and did not develop the electric light any further. His claims are not well documented, although he is credited in Challoner et al. with being the inventor of the "Incandescent Light Bulb".

In 1840, British scientist Warren de la Rue enclosed a coiled platinum filament in a vacuum tube and passed an electric current through it. The design was based on the concept that the high melting point of platinum would allow it to operate at high temperatures and that the evacuated chamber would contain fewer gas molecules to react with the platinum, improving its longevity. Although a workable design, the cost of the platinum made it impractical for commercial use.

In 1841, Frederick de Moleyns of England was granted the first patent for an incandescent lamp, with a design using platinum wires contained within a vacuum bulb.

In 1845, American John W. Starr acquired a patent for his incandescent light bulb involving the use of carbon filaments. He died shortly after obtaining the patent, and his invention was never produced commercially. Little else is known about him.

In 1851, Jean Eugène Robert-Houdin publicly demonstrated incandescent light bulbs on his estate in Blois, France. His light bulbs are on display in the museum of the Château de Blois.

In 1872, Russian Alexander Lodygin invented an incandescent light bulb and obtained a Russian patent in 1874. He used as a burner two carbon rods of diminished section in a glass receiver, hermetically sealed, and filled with nitrogen, electrically arranged so that the current could be passed to the second carbon when the first had been consumed.Later he lived in the USA, changed his name to Alexander de Lodyguine and applied and obtained patents for incandescent lamps having chromium, iridium, rhodium, ruthenium, osmium, molybdenum and tungsten filaments, and a bulb using a molybdenum filament was demonstrated at the world fair of 1900 in Paris.

Heinrich Göbel in 1893 claimed he had designed the first incandescent light bulb in 1854, with a thin carbonized bamboo filament of high resistance, platinum lead-in wires in an all-glass envelope, and a high vacuum. Judges of four courts raised doubts about the alleged Göbel anticipation, but there was never a decision in a final hearing due to the expiry date of Edison's patent. A research work published 2007 concluded that the story of the Göbel lamps in the 1850s is a legend.On 24 July 1874, a Canadian patent was filed by Henry Woodward and Mathew Evans for a lamp consisting of carbon rods mounted in a nitrogen-filled glass cylinder. They were unsuccessful at commercializing their lamp, and sold rights to their patent (U.S. Patent 0,181,613) to Thomas Edison in 1879.

The initial cost of an incandescent bulb is small compared to the cost of the energy it uses over its lifetime. Incandescent bulbs have a shorter life than most other lighting, an important factor if replacement is inconvenient or expensive. Some types of lamp, including incandescent and fluorescent, emit less light as they age; this may be an inconvenience, or may reduce effective lifetime due to lamp replacement before total failure. A comparison of incandescent lamp operating cost with other light sources must include illumination requirements, cost of the lamp and labor cost to replace lamps (taking into account effective lamp lifetime), cost of electricity used, effect of lamp operation on heating and air conditioning systems. When used for lighting in houses and commercial buildings, the energy lost to heat can significantly increase the energy required by a building's air conditioning system, although during the heating season such heat is not all wasted, but is not as effective as the heating system.

Some research has been carried out to improve the efficacy of commercial incandescent lamps. In 2007, the consumer lighting division of General Electric announced a "high efficiency incandescent" (HEI) lamp project, which they claimed would ultimately be as much as four times more efficient than current incandescents, although their initial production goal was to be approximately twice as efficient.The HEI program was terminated in 2008 due to slow progress.

US Department of Energy research at Sandia National Laboratories initially indicated the potential for dramatically improved efficiency from a photonic lattice filament.However, later work indicated that initially promising results were in error.

Prompted by US legislation mandating increased bulb efficiency by 2012, new "hybrid" incandescent bulbs have been introduced by Philips. The "Halogena Energy Saver" incandescent is 30 percent more efficient than traditional designs, using a special chamber to reflect formerly wasted heat back to the filament to provide additional lighting power.

Incandescent lamps are very sensitive to changes in the supply voltage. These characteristics are of great practical and economic importance.

For a supply voltage V near the rated voltage of the lamp:

Lifetime is approximately proportional to V ?16

This means that a 5% reduction in operating voltage will more than double the life of the bulb, at the expense of reducing its light output by about 16%. This may be a very acceptable trade off for a light bulb that is in a difficult-to-access location (for example, traffic lights or fixtures hung from high ceilings). Long-life bulbs take advantage of this trade-off. Since the value of the electric power they consume is much more than the value of the lamp, general service lamps emphasize efficiency over long operating life. The objective is to minimize the cost of light, not the cost of lamps.Early bulbs had a life of up to 2500 hours, but in 1924 a cartel agreed to limit life to 1000 hours.When this was exposed in 1953, General Electric and other leading American manufacturers were banned from limiting the life.

The relationships above are valid for only a few percent change of voltage around rated conditions, but they do indicate that a lamp operated at much lower than rated voltage could last for hundreds of times longer than at rated conditions, albeit with greatly reduced light output. The "Centennial Light" is a light bulb that is accepted by the Guinness Book of World Records as having been burning almost continuously at a fire station in Livermore, California, since 1901. However, the bulb emits the equivalent light of a four watt bulb. A similar story can be told of a 40-watt bulb in Texas that has been illuminated since 21 September 1908. It once resided in an opera house where notable celebrities stopped to take in its glow, and was moved to an area museum in 1977.

In flood lamps used for photographic lighting, the tradeoff is made in the other direction. Compared to general-service bulbs, for the same power, these bulbs produce far more light, and (more importantly) light at a higher color temperature, at the expense of greatly reduced life (which may be as short as two hours for a type P1 lamp). The upper temperature limit for the filament is the melting point of the metal. Tungsten is the metal with the highest melting point, 3,695 K (6,191 °F). A 50-hour-life projection bulb, for instance, is designed to operate only 50 °C (122 °F) below that melting point. Such a lamp may achieve up to 22 lumens per watt, compared with 17.5 for a 750-hour general service lamp.

The wires used to support the filament make it mechanically stronger, but remove heat, creating another tradeoff between efficiency and long life. Many general-service 120-volt lamps use no additional support wires, but lamps designed for "rough service" or "vibration service" may have as many as five. Low-voltage lamps have filaments made of heavier wire and do not require additional support wires.

Very low voltages are inefficient since the lead wires would conduct too much heat away from the filament, so the practical lower limit for incandescent lamps is 1.5 volts. Very long filaments for high voltages are fragile, and lamp bases become more difficult to insulate, so lamps for illumination are not made with rated voltages over 300 volts.Some infrared heating elements are made for higher voltages, but these use tubular bulbs with widely separated terminals. 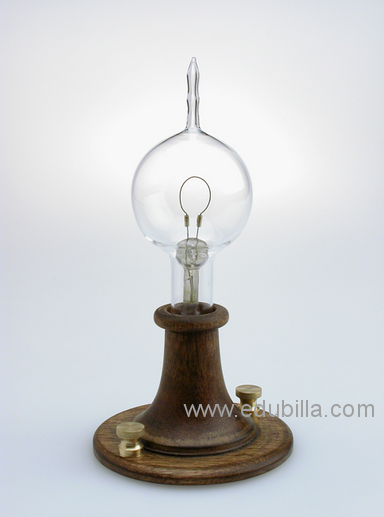 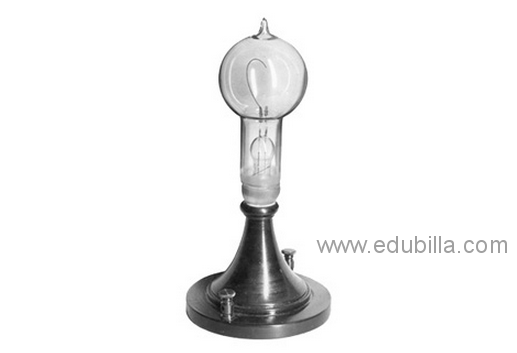