The coherer is a primitive form of radio signal detector used in the first radio receivers during the wireless telegraphy era at the beginning of the 20th century. Its use in radio was based on the 1890 findings of French physicist Edouard Branly and adapted by other physicists and inventors over the next ten years. The device consists of a tube or capsule containing two electrodes spaced a small distance apart with metal filings in the space between. When a radio frequency signal is applied to the device, the metal particles would cling together or "cohere", reducing the initial high resistance of the device, thereby allowing an electric current to flow through it. In a receiver, the current would activate a bell, or a Morse paper tape recorder to make a record of the received signal. The metal filings in the coherer remained conductive after the signal (pulse) ended so that the coherer had to be "decohered" by tapping it with a clapper each time a signal was received, thereby restoring the coherer to its original state. Coherers remained in widespread use until about 1907, when they were replaced by more sensitive electrolytic and crystal detectors.

In 1890 French physicist Edouard Branly published On the Changes in Resistance of Bodies under Different Electrical Conditions in a French Journal where he described his thorough investigation of the effect of minute electrical charges on metal and many types of metal filings. In one type of circuit, filings were placed in a tube of glass or ebonite, held between two metal plates. When an electric discharge was produced in the neighbourhood of the circuit, a large deviation was seen on the attached galvanometer needle. He noted the filings in the tube would react to the electric discharge even when the tube was placed in another room 20 yards away. Branly went on to devise many types of these devices based on "imperfect" metal contacts. Branly's filings tube came to light in 1892 in Great Britain when it was described by Dr. Dawson Turner at a meeting of the British Association in Edinburgh.The Scottish electrical engineer and astronomer George Forbes suggested that Branly's filings tube might be reacting in the presence of Hertzian waves, a type of air-born electromagnetic radiation proven to exist by German physicist Heinrich Hertz (later called radio). 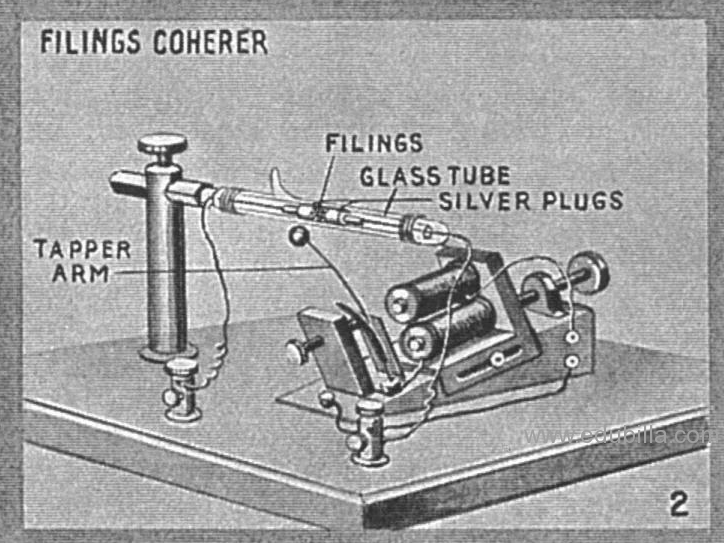